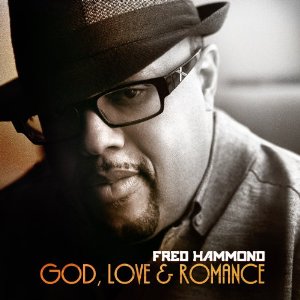 I read from an interview prior to Fred Hammond’s latest release, God, Love, and Romance that he was unsure how his fans would receive it.

Well, I believe his fans should not worry about that at all and he will pick up some new fans from this excellent CD.

Hammond covers the topic of love and relationships with a Godly perspective in a variety of genres from jazz, funk, r & b, gospel and rock.

What I can appreciate from Hammond is that he doesn’t covers the subject in a manufactured “Christianese” way.  He sings about dating, marriage, and divorce in a way that everyone can relate to, Christian or not.

BTW, he refers to the Song of Solomon throughout both CDs and that refreshing to hear.  (When was the last time a pastor taught from that book to their congregation?)

I played both CDs through in one setting and the stand-out cuts for me are: When I Come Home to You, I’m In Love With You, The Proposal, My Love Is Real, I See the Sunshine’n, and I Got A Good Woman.

The last song I mentioned has an interlude where two men are talking and one of them asked the other how has been able to stay married for 20 years.  The man replied that their marriage had not be easy and they almost reached the breaking point several times during their marriage.  But, he saw his wife praying for him and he had never seen anything like that before. (Prayer works!) He was touched by and realized how much his wife loved him and would do anything to keep their marriage together.  Powerful and Touching!

Hammond’s latest shows how Christian music can expand and go beyond the status quo to reveal how God can work in one of the most important areas in our lives.

I will that write God, Love, and Romance deserves 4 out of 5 stars and is a must have in your CD collection.