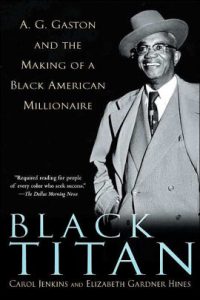 “Athletes and musicians who have made millions in their industries deserve our respect, but it is critical that blacks understand that our history, and our (often neglected) successes, run deeper than that. All children need to be made familiar with images and stories of blacks who have found success in the boardroom and the classroom, along with those who have found it on the court and in the clubs. Every child should have the privilege of believing, as I did growing up, that skin color does not determine success—dedication does.”

I thought I would begin my latest review with a paragraph from the epilogue of Black Titan by Carol Jenkins and Elizabeth Gardner Hines.  The niece and grandniece of Alabama Businessman A.G. Gaston told the story from his post Civil War impoverished childhood to becoming a multimillionaire and Birmingham’s most prominent African American entrepreneur.

Sadly, I had never heard of A.G. Gaston until a few months ago on a podcast where Professor Greg Carr of Howard University mentioned his name briefly and the overlooked contribution the entrepreneur made during the civil rights movement during the 1960s, mostly in Birmingham. Gaston became an entrepreneur upon accident and a deep need to get out of poverty.  His empire began with a funeral company (since white-owned funeral homes would not bury black folks) and expanded into an insurance company, bank, motel (which was prominent during the civil rights movement), business college, and boys & girls’ club. They estimated that Mr. Gaston’s net worth reached 130 million at the time of his death in January 1996.  He lived to 103 years old.

Gaston was a complicated figure that believed loyalty and dedication were keys to success.  His business credo, “Find a need and fill it,” served him well in nearly every business venture he undertook. Of course, no one was perfect ,and the book chronicled his failed venture with Brown Belle Soda Pop Company and his tense but respectful relationship with Martin Luther King.

That relationship (along with his business principles) were the highlights for me in the book.  They labeled Gaston as a black conservative and called him an Uncle Tom for continuing to accommodate Birmingham’s white power structure by those who followed King and his nonviolent approach in attempting to desegregate the city.  The entrepreneur wanted the same outcome as King, but understood that economic power was just as important a factor for black progress as well as social justice. Gaston stung by being labeled an Uncle Tom but stood firm in his beliefs.  As time has passed, Gaston’s viewpoint helped shape a post civil-rights Birmingham as much as King did.

I appreciated the book, highlighting the fact that two black men on the opposite side of the political and social spectrum could work together despite their differences.  Gaston bailed King out of jail during his time in Birmingham. King deposited $1,000 (worth about 8,100 dollars today) into Gaston’s bank as a sign of support.  The entrepreneur and the activist seemed to understand they needed each other and proved that when a bigger cause is at work, they could set aside differences to reach the goal.

February is Black History Month, and I have made it my mission to learn something about African American life I had not known about before.  Black American life throughout our history in this country in multilayered and complex. Our contributions run deep and a rags-to-riches story like A.G. Gaston should be celebrated as an American success story by everyone.

Black History Month has passed, and I had a plan to read three non-fiction books about black history during the month of February.  I finished Maurice White’s wonderful biography, My Life with Earth, Wind & Fire quickly and then I read Before The Mayflower by Lerone Bennett, Jr.  Bennett’s groundbreaking book chewed up the… END_OF_DOCUMENT_TOKEN_TO_BE_REPLACED

I was challenged recently by a blog reader to read and review more nonfiction books. I have read fiction books for most of my reading life. There were numerous reasons why I have gravitated towards novels instead nonfiction. However, I chose not to state those reasons in response and accepted their challenge. I have decided… END_OF_DOCUMENT_TOKEN_TO_BE_REPLACED

Daddy, I’m ready to read another book with you at bedtime. I loved hearing that sentence from my 10-year-old daughter, Norah. We have read many books together over her young life. This time she wanted about women in science. I did a Google search a few weeks ago and came across Black Women in Science… END_OF_DOCUMENT_TOKEN_TO_BE_REPLACED

February is Black History Month in the United States and I have always wanting to learn something about our history as Americans that I did not know previously. Well, I found out last month on the Rick Steves’ travel podcast about a travel guide published during the days of Jim Crow. The Negro Motorist Green… END_OF_DOCUMENT_TOKEN_TO_BE_REPLACED