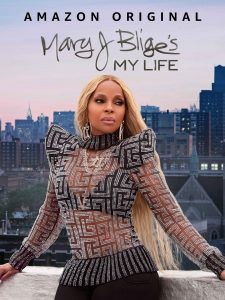 Mary J. Blige’s My Life is one of my top ten favorite albums and one of the most important R&B albums to be recorded in the last thirty years.  Blige’s pain and vulnerability soars throughout the entire album and how sings over strong hip-hop beats makes it a landmark album that has stood the test of time.

When I found a few months ago that she had released a documentary about the making of the album and where she was as an artist got me excited.  Finally, I sat down to watch it last night and the documentary chronicled her journey from growing up in Yonkers, NY to getting signed to a recording contract at 19, being molded and shaped by Sean “Puffy” Combs into becoming the queen of hip-hop soul, and her turbulent emotional state while recording the album.

My Life documentary has many celebrities like Alicia Keys, Taraji P. Henson, Nas, and Method Man speaking in glowing terms of the album’s impact and connection to so many in the hip-hop and R&B worlds.  Blige’s rawness and sincerity on the album was a breath of fresh air to the genre and added a much-needed edge.  The movie is definitely a love letter to her fans and snippets of the 25th Anniversary Concert at the Barclays Center in Brooklyn and a section of it showing her family and fans gave it a feel that Mary J. wanted to show appreciation for them sticking with her through the perilous journey to musical stardom.

However, there were a couple of moments in the documentary that touched me on an artistic level. I wished the documentary showed a lot more of those moments.  The first moment was when she talked hearing Roy Ayers’ soul-jazz classic, Everybody Loves The Sunshine, for the first time and how that song became a balm during childhood. Ayers’ song took her away from the pain she was experiencing and gave a much-needed place to escape. I immediately connected with the same feeling from my childhood and said out loud to the tv….that’s what art can do.  It can take you place that you have never been before.  It can create a protective space that will help you deal with life’s difficulties. And it can provide an outlet to express who you really are inside. Mary J understood in her connection to the Roy Ayers song and it makes sense that years later she would use a sample from the song to write her best and most personal song on the album. The title track is my absolute favorite song on the album and the fact she could sing about her life in such dark terms over an ebullient music like Everybody Loves The Sunshine speaks to how good art can bring contrasting elements together perfectly.

The second and final moment that touched me was when Mary J spoke about how she sung Anita Baker’s Caught In the Rapture song for the late record executive Andre Harrell.  Harrell was head of Uptown Records at the time and was one of the pioneers in bringing hip-hip soul to popular culture in the early 1990s. Baker’s music was the polar opposite of what she would sing throughout her career.  And to see a snippet of Mary J and Anita singing together on stage at the 25th Anniversary Concert had my full attention.  In some ways it was the passing of the torch and in other ways it was a bridge from R&B’s past to its future.  I loved it and wished I could have seen more of that part of the concert.

Mary J. Blige’s My Life gives a glimpse into the singer’s life as she recorded her landmark album. I had read some critic’s reviews stating they wished the documentary went more into detail about her emotional state during the recording process. The critics felt like the documentary left a lot of meat on that bone.  It’s a fair point but somewhat short-sighted. Artists (and people) will only give what they want to show publicly and it is up to us to gleam as much from it as we can. If you can appreciate it on that level, then you will find some satisfaction. Mary J Blige provides a window into one of the best R&B albums ever released and I’m glad to have taken that journey with her.