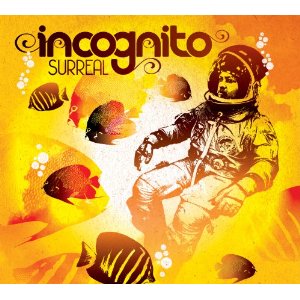 For those who known me personally know that Incognito has been one of the bands I have listened to consistently over the past 20 years. (Pat Metheny Group is the other band.)

They are my favorite band and everytime I have played their music for someone, people have always been very receptive to their British Soulful Jazz mixed with 70’s funk.  They are always surprised by the fact that they have never heard of Incognito before.

Boy, they don’t what they have been missing!

As you can see, writing a review about your favorite band will make you tend to lose any sense of objectivity.  However, I will attempt to do just that on their latest CD release, Surreal.

I got Incognito’s latest earlier this week and I have not stopped playing it since.  Surreal reminded me of the soulfulness of their 100 Degrees and Rising CD and the jazzy vibes of Tribes, Vibes, and Scribes & Inside Life CDs.

The standout songs on Surreal are The Less You Know (featuring longtime vocalist, Maysa); Goodbye to Yesterday; Above the Night (my favorite song); Capricorn Sun (another one sung by Maysa); Don’t Wanna Know; The Way You Love; and Rivers on the Sun (an Incognito standard instrumental and my second favorite song).

Moreover, there is not a bad song on the CD and after their last two CDs: Tales from the Beach and Transatlantic RPM which were disappointing for me. Surreal is a strong return reminiscent of Incognito’s best work from the early to mid 90’s.

I will give Surreal 4.5 out of 5 stars and highly recommended to it anyone who loves soulful jazz, 70’s funk, and good, uplifting music in general.