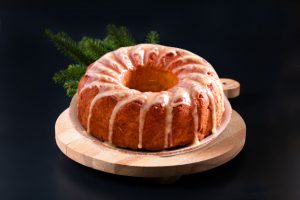 Those who know me well have heard me speak about my love of pie (cherry and sweet potato) over cake a lot.  I’m definitely on Team Pie.  However, there is a cake that has become a trinity of my favorite desserts.

This wonderful cake has been a Christmas tradition for me since childhood and I’m glad my wife has included it as a part of our Christmas meals annually.

Rum Cake seems to have originated from the Caribbean. In their tradition, the dried fruit is soaked in rum for an extended time period and added to the dough prepared with sugar which has been caramelized by boiling in water. In this region, rum cake is also known as Black Cake. Rum Cake has been popular in America since the early 1970s and is a staple holiday dessert for many in the American South.

My mother uses Bacardi Gold Rum and Walnuts for the cake.  Also, she adds lemon glaze to give a little something extra to the cake.  I don’t care for cake frosting, and with rum cake you don’t need much of it. Too much frosting impedes the cake.  I want to eat cake, not frosting. My wife has used the same recipe and her rum cakes have turned out just as wonderful.

Here are a few fun facts about Rum Cake:

1) Rum Cake is the choice for wedding cake in Jamaica and other parts of the Caribbean. Because of its popularity at weddings, it is sometimes referred to as Wedding Cake.

2) Fruits are soaked in rum for many weeks or even months prior to baking.

3) Rum Cake can be attributed to the rum-running popular in the early 1900s.  Rum was bootlegged into the United States from the Bahamas and the dessert became popular because of this illegal activity.

4) Rum Cake (known as Baba Au Rhum Cake) was brought to France in the 1600s. Legend that it was a favorite of King Louis XV.  Also, it was called Father’s Cake in Turkey.

This dessert has a lengthy history and a favorite for many around the world.  I just found out that someone has made a Pineapple Rum Cake.  Oh, my word….I want to try that right now!  Rum Cake is a great dessert and if you have never tried it, I highly recommend it.  It is a wonderful cake.