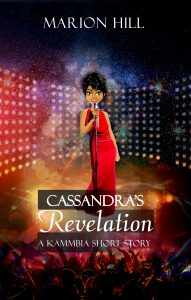 “Cassandra’s Revelation,” is about a chance meeting between Cassandra Applebaum, a sultry-voiced singer who hadn’t sung in years, and an old friend—one who saw Diondray stop a rainstorm.

Inspired by her friend’s account, Cassandra penned a new song, “The One Who Made the Rain Go Away.” After a few days, she received a call from a nightclub owner. Reluctant to test her pipes after years away from the stage, she slept on his offer. During the night, she dreamed that she would meet the young man who inspired her song if she would accept the club owner’s offer.

Will she return to the stage? Will she meet this mysterious young man? Find out when you read “Cassandra’s Revelation.”

I heard about someone stopping a rainstorm that came from the sea.

A storm believed by some to come from the sea god.

But I was told the sea god had left us during the time of Syonne.

Syonne said the people must believe in themselves

Not gods who want to control humankind.

And if we stopped believing in them

They would leave us.

But how do you explain my friend’s claim about

The One Who Made Rain Go Away?

The rain came out of nowhere

The beachgoers fled the beach for cover

But there was one who walked toward the rain

One with skin as dark as mine

One with thick hair and kinky as mine

One who went to the rain

One who made it stop

And how do you explain

About the One Who Made Rain Go Away?

Those lyrics came the next morning after Dirke Edenkirche told me what he saw on the beach the previous day. The rainstorm came suddenly and a downpour that usually happened in the seventh month of Yul arrived five months earlier.

Dirke believed only Megaro, the sea god could have a created rainstorm like that. However, the sea god had not been heard of since the days of Syonne as a regnator from generations ago. They mentioned Megaro in the history books and taught about him at the universities as the god who helped Hendric Terrance Goltz cross the Kammara Sea from the land of Hamburg. Most of us who live on the beach in the Megaro District believe the sea god never left us.

Could his return come from a young man that stopped the rainstorm? Dirke described this young man as having dark-brown skin as myself with a huge treetop hairstyle and a lanky build. This young man could have been my second son. Where would somebody like that have the magic to stop a rainstorm?

I went to the beach for the next few days hoping to find this young man. I heard beachgoers repeated what Dirke had told me and knew I had to find him. However, I had heard he might have left the city. The young man was from Charlesville and could have returned to his home city. I’ve had several concerts in Charlesville and knew the ruler of that city, Xavier Azur. I thought about using that connection to see if he knew about this young man.

I got a call from Frank Oberhoff, owner of the Mannheim nightclub, about doing a performance. I had not performed in nearly two years and did not have a desire to sing at the nightclub anymore. Frank offered me a lot of money and promised that he would have the best patrons for the performance. I slept on the offer and a dream came I would see the young man at the nightclub. I agreed to Frank’s offer.

I spent the next day with my band fine-tuning the song. We played for a couple hours and I knew the song was ready to go for the performance.

I stepped out on that stage and saw the audience’s smiles. I felt that rush of performing like I did as a child. Those smiles gave me the energy to perform a song I had not recorded before. I knew they wanted to hear their favorites like “You Belong to Me” or “Brownberry Wishes”, but I knew what song I had to sing at the performance.

I looked over to my left after I finished the first verse and I saw him. The young man Dirke described was sitting at the table with the former professor turned beach philosopher, Barron Rieder. I met Barron several times and sensed he wanted to get to know me. However, I was not interested in someone who had a reputation as a ladies’ man. I needed a man’s undivided attention and I would not be a notch on someone’s belt. No thank you. Anyway, he had a woman at their table and it seemed they were lovers.

The young man sat to the right of the woman and he looked exactly how I saw him in my dream. He had a surprised look on his face. I noticed him looking at me and then to Barron. Did he think the beach philosopher told me about him? I had to speak to him. I had to know how he stopped the rainstorm and how he was connected to a leopard that appeared on the beach.

I got through the second verse and a set of songs quickly as I could. I kept my eyes on that table and watched when he got up during the break. I was sure he would come back for my last set.

He was gone. I could tell that Barron and his lady friend did not know he had left the nightclub. They kept looking around for him and Barron got up after my last set to find him. Where did he go?

I wanted to speak to him. And I probably lost my chance for good.

← My 2019 Reading List
Wisdom From Kammbia Book Review 1: The Ivory and the Horn by Charles de Lint →