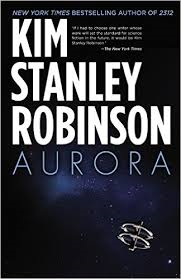 “Human beings live in ideas. That they were condemning their descendants to death and extinction did not occur to them, or if it did they repressed the thought, ignored it, and forged on anyway. They did not care as much about their descendants as they did about their ideas, their enthusiasms.”

This paragraph came late into Kim Stanley Robinson’s latest novel, Aurora, but summarize for me as a reader what theme he was trying to bring forth in the book.

The idea of leaving Earth going into space to find a new home has been a well-worn and traveled trope for many science fiction authors. However, this trope in a skilled hand like Robinson gives it a fresh new coat of paint and a upholstery job as well.

Aurora tells the story a first voyage beyond our galaxy to find a new home. Robinson presents the narrative from a couple of perspectives: Freya, a passionate, fiery alpha female that grows from a teenager to middle age and the artificial intelligence of the ship itself that becomes more human-like during the voyage.

Robinson adds political intrigue and scientific realism to this seemingly quixotic voyage.  Also, a major decision has to be made that tests everyone’s beliefs onboard the generation starship.  It seems that Robinson wanted to take the fantasy aspects out of the space opera trope to reveal how unlikely such a voyage could be.

Also, the main criticism of a Kim Stanley Robinson novel is the reliance of the “info-dump'” into his narrative. Robinson defends himself here about that criticism. Actually, I found his ‘info-dumps” interesting and profound, while bringing the story’s pace to a crawl. Moreover, like he did in the excellent and groundbreaking Mars Trilogy, Robinson gives a highly detailed and believable scenario of how a voyage could actually happen.  My main issue with the novel is the political slant it presented more than anything else.

In closing, I’m glad I read Aurora and would recommend it for serious science fiction readers and hardcore Robinson fans.  Also, I believe Aurora will be nominated for all the major science fiction awards this year.