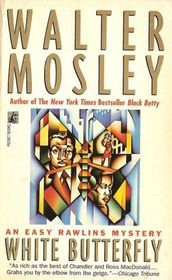 For the next two reviews, I will be reviewing a couple of novels from authors I’ve been wanting to read for a really long time.  Oddly enough, both authors are completely different on the literary spectrum. I have looked at their books for years and said to myself, “I have to read a novel of theirs someday.”  Someday has finally arrived and the timing is right.

Mosley is known for the Easy Rawlins mysteries and White Butterfly is third one published in the series. However, I felt after reading this novel it was a good entry point for a Mosley newbie like myself.

White Butterfly is about a series of murders in the black community of Los Angeles in 1956. The police paid little attention to the murders since the victims were black women.  But, when a white stripper, Cyndi Starr, AKA The White Butterfly is murdered then everything changes. It turns out that she was a UCLA coed and daughter to one the city’s most powerful attorneys that finally gets the police’s attention.

At first, Easy Rawlins didn’t want to have anything to do with solving the murder of White Butterfly. He wanted to spend time with his new wife, the kids, and be left alone. However, when his best friend, Raymond “Mouse” Alexander is considered a suspect in the murder that Easy gets drawn in.

White Butterfly is a standard whodunit story with several interesting twists and turns that makes it a good, solid read. But for me, Easy Rawlins is the most compelling reason for reading the novel.

He is a character of surprising contradictions. Easy is a ladies’ man but adopts a Hispanic boy named Jesus and raising him as his son. He has a best friend who wants to kill anyone that crosses him but Easy prefers not to kill when solving a case. Moreover, most of the community where he lives is poor, but he lives comfortably and holds several pieces of real estate which becomes an interesting subplot in the novel.  Those contradictions are shown in good detail and takes White Butterfly beyond the usual mystery story.

Most critics of Walter Mosley have praised his authentic dialogue similar to Elmore Leonard. But, I will have to disagree with those critics. I felt the dialogue of Broken English distracts from the story and took away from Easy’s rich characterization. (Maybe, since I grew up in Florida and I’ve heard people talk like that all the time…that it didn’t nothing for me.) That was my main critique of the novel.

If you are looking for a good mystery with a colorful main character and an original setting then I will recommend White Butterfly for your reading pleasure.