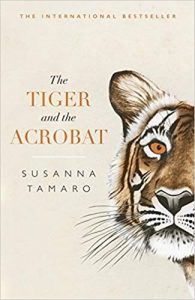 I mentioned that one of my reading goals for this year was to read more translated fiction. It has been so easy for me to stay on the reading highway of contemporary American Genre and Literary Fiction that’s hard to exit it for fiction outside of your borders.

The Tiger and Acrobat by Italian novelist Susanna Tamaro will make the third translated novel I read this year following The 6.41 to Paris by Jean-Philippe Blondel and The Girl on Paper by Guillame Musso. (Also, I read The Resurrection of Fredric DeBreu by England’s Alex Marsh.  It was not translated but a lot of the novel took place in France.) I believe The Tiger and the Acrobat is my favorite translated fiction of the year by a hair over The 6.41 to Paris.

It is the story of Little Tiger, a female tiger that has an unusual ability to communicate like human beings. The novel covers her journey from cub to adult tiger and how she could never fit in with both the tiger and human communities.  The story is written a parabolic style than a regular novel.  However, Little Tiger’s journey captivated me especially how she interacted with human beings from an elderly man on the taiga that could speak in her language to the little acrobat she met after being caught for the circus and to the another man dressed in tattered clothes she met after escaping the circus.

Little Tiger learns about man’s nature after those interactions and this quote from early in the novel reveals the theme of the book:

“For us humans it is much more complicated to try to be profoundly human.”

I would write for Little Tiger it became more complicated to be profoundly tiger.  I read The Tiger and the Acrobat in two sittings and glad to have come across such a wise and insightful book. I will admit that I thought about The Life of Pi by Yann Martel as I read this novel.  However, I like Tamaro’s novel a lot more.  The Tiger and the Acrobat will be one of my favorite reads of 2018.