Tag Archives: Why I Run 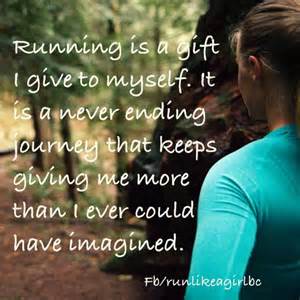 I have always followed the beat to my own drummer.

Running has helped me embrace that drum beat.  I started to run seriously for the first time over the summer. My wife is a member of a running club and has been running with them for quite awhile.  Her participation in that running club got my attention. I decided to start running as well and part of my motivation was to have an activity that we could share to together.

However, running has given me such more than I expected and now it has become an integral part of my life.  I will be running for the rest of my days.  I’m forty-four and never had any interest in running as a kid or in my 20’s or 30s.  Why this new found interest in running all of sudden?

I believe it’s a gift from God and in an unique way has helped me with my faith and writing.  Also, I believe that timing is everything and was ready to embrace a physical activity like running at this point in my life.

I’m currently training for my 1st 5k run at the Rock-n-Roll Marathon San Antonio in early December. I’m looking forward to that race and competing with the other runners.

Running over the past few months has shown me that if you put your mind to something, you can do it.  Also, I’ve learned that running is just as much mental as it is physical.  And it has given me confidence to push myself a little further outside of my comfort zone.

I just ran my farthest distance of 5 miles in the middle of the afternoon on a Sunday.  Of course, there is football to watch.  But I wanted to get a run and I felt my spirit asking me for it.  That’s why I know running has become a part of my life from now on and it has gone deeper than any tangible benefits I wanted to achieve from it.

I will be writing a blog post every so often on my running pursuits and the effect it has on my life.  I’m just grateful that running has discovered me instead of the other way around.