Tag Archives: What People Leave Behind 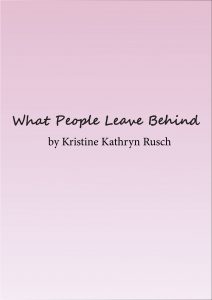 My reading excursion into short stories continues with an excellent whodunit story set in a suburban Oregon town where a single mother who owns a housecleaning business of foreclosure homes ends up on the wrong end of a home explosion.

What People Leave Behind by Kristine Kathryn Rusch told the story of how Detective Andrea Donovan was going to solve the murder of Gracie Ansara and her employee, Micah Collingsworth.  Gracie and Micah got a new job cleaning of a McMansion that was formerly owned by the Martin family.  The Martin family lived beyond their means and had their home foreclosed upon recently.  Detective Donovan learned how Gracie rebuilt her life after her husband’s death in a car accident and raised three kids while creating a successful business.

Rusch did a solid job of bringing that family dynamic into the story and how Detective Donovan lean into that aspect in order to solve Gracie and Micah’s death. I had to admit that my suspicion towards one character in the story was unfounded, and Rusch provided enough surprises by the end to show who the actual killer was.

As someone who has spent a majority of my professional career in the mortgage business, this story connected to me on a different level than most stories I have read recently. That was refreshing and unexpected to read. However, I would like to have known more about Detective Donovan’s personal life to round out her character but the story’s focus was on solving the crime.  I got that and was satisfied in the way Rusch resolved it by the story’s end.

I don’t read a lot of whodunit stories (short stories or novels) but a skilled storyteller like Rusch will make me read anything she publishes.  Storytelling skills translate across genres and when someone does it well, you can appreciate the craftsmanship.  Mystery fans looking for a good story to read under forty pages have a winner in What People Leave Behind. This story first appeared in Alfred Hitcock’s Mystery Magazine in the Summer of 2010 and Rusch has published it as an individual short story.  Rusch fans and mystery readers should definitely check it out.