Tag Archives: The Land Across 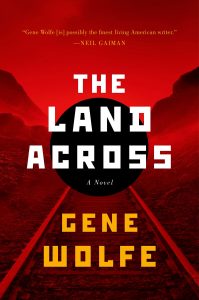 One of the greatest living American authors just had their eighty-seven birthday earlier this month.  Is it Philip Roth? Cormac McCarthy? Richard Ford? John Irving? Toni Morrison?  None of them.  It is Gene Wolfe.

Wolfe has never gotten the mainstream literary success or lauded like those aforementioned authors. However, he is revered and celebrated in the Science Fiction and Fantasy genre as one its greatest practitioners. Beloved by writers from Neil Gaiman to George R.R. Martin revealing the appreciation he has garnered throughout his lengthy career. There have been several articles like this one on how readers should approach the author’s work.

The Land Across is my third reading experience with a Gene Wolfe novel. Pirate Freedom and Nightside of the Long Sun were my first two Gene Wolfe experiences, and both left me with an admiration of his immense talent and a challenge as a reader to figure out what those stories were about. Well, I believe I have come to the same conclusion in The Land Across.

This novel is a story about an American travel writer, Grafton, arriving into a small and obscure Eastern European country for inspiration of his next book. However, when his life gets turned upside down soon as he exits the plane. He gets his passport taken and detained by the authorities.  Grafton is released into custody by a local family but the woman of the house has amorous intentions with him. He ends up getting recruited by a secret organization who wants to spread propaganda throughout the country. And he gets caught up in a spy ring that tries to takedown the secret organization.

Is Grafton an innocent traveler caught up events outside his control?  Or he is a part of a web of activities that eludes more of a connection than previously known? Wolfe plants clues to make your believe in both Grafton’s innocence and connection to the country’s political scene. His reputation for making readers work is on display in The Land Across and keeps you guessing until the end of the novel.

Overall, I liked The Land Across more than I loved it. It seems that Wolfe was making a commentary about the fragility of democracy and how it can change suddenly if the wrong leadership gets power. I can see many readers making that connection to today’s political climate. I can appreciate how Gene Wolfe continues to write interesting novels at this stage of his career. He has not rested on his laurels and adds another novel to an impressive bibliography.