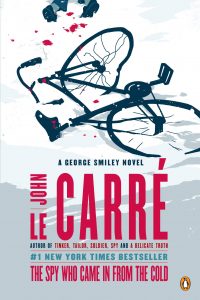 Le Carre’s third published novel told the story of British spy Alec Leamas as he went on one last mission to bring down German operative Hans-Dieter Mundt. Leamas’s life turned into one of alcoholism and banishment from his colleagues because of his abrasive personality and solitary nature.  However, he met a library assistant named Liz Gold and a connection was made between them.

Leamas was brought to Germany in order to bring down Mundt.  But, the plan by the British Intelligence was discovered by the German and a trial revealed everything.  Or that’s what the reader was lead to believe? What made The Spy Who Came In From The Cold the best spy novel I have ever read is the characterizations of Leamas and Liz Gold.  Their connection added depth to a story that could have been riddled with cliches. Le Carre’s breakout novel revealed the perils of someone who was trying to leave the spy business for good and how an innocent person could get caught up in a situation beyond their wildest imaginings.

The Spy Who Came In From The Cold is an excellent spy novel and study of character. Upon a second reading, I will contend is a work of literature and should be read by serious readers.  The Cold War has passed but the story is still relevant nearly six decades later.