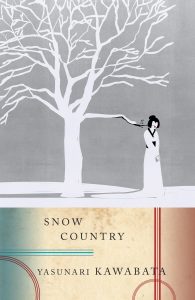 Sometimes in reading a novel for the second time, you will not get the same feeling when you read it previously. This is the case for Snow Country by Yasunari Kawabata. Snow Country is considered to being Kawabata’s masterpiece.  And for many reasons, I agree with that assessment. However, as I’m getting older, I realize that doomed love affair stories don’t have the same appeal they once did for me as a reader.  Love has its own challenges when you make that kind of connection with another human being, and I don’t have the patience to figure out if someone feels a certain way or not. I understand the dance that can happen with love, but it can be exhausting on the page as it is in actual life.

Snow Country falls into that understated, everything is between-the lines type of love. I will write it’s beautifully written and descriptions of Western Japan’s snowiest region are stunning. I love a setting in fiction, especially when it becomes a character in the story as well. However, I need to find something interesting about the characters in the story alongside the setting.  As a reader, I don’t need to relate to the characters. (Actually, I think the character relatability in fiction is oversold and can shortcut the enjoyment of reading.)  But I need some kind of connection point on a basic human level.   And I did not quite get that upon this second reading of Kawabata’s masterpiece.

Shimamura is a married, wealthy Tokyo businessman that travels every so often to Western Japan because of his dalliance to a geisha named Komako. It troubles Komako about the relationship with Shimamura.  Kawabata reveals the vicissitude of their relationship throughout the novel. I could see current readers having a problem with Komako’s characterization as an emotionally unstable woman. That would be a fair assumption on the surface level of the story.  However, I must admit that I found her character as the most dynamic in Snow Country.  She carries the novel more than Shimamura.

Even though I knew this love affair had only one outcome. Kawabata provides a subtle and surprising love triangle with another geisha named Yoko that gives the novel a lot more depth. It is not a classic Western-style love triangle by any means, and the ending bares it out.

Snow Country is the third Kawabata novel I have read (Beauty & Sadness and Thousand Cranes are the others) and is still my favorite book of his work.  I’m a patient reader and like an interesting love story, when it’s well done. But I have to admit that wanted a little more straight-forwardness between Shimamura and Komako. Yasunari Kawabata is one of Japan’s greatest writers and a must for readers. Also, the translation by Edward G. Seidensticker is sublime. I just learned a valuable reading lesson that some books are never as good as the first time.