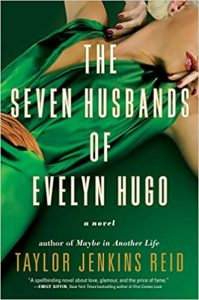 Have you ever read a novel where you hated the main character but found the story compelling?

Have you ever read a novel where you loathed the main character’s lifestyle choices but can still find compassion in those choices?

Have you ever read a novel you did not like where the boundaries of love were pushed too but can still see the need for love in all circumstances?

The Seven Husbands of Evelyn Hugo by Taylor Jenkins Reid answers in the affirmative to those aforementioned questions. This runaway bestseller (soon to be a Netflix movie) tells the story of the legendary actress Evelyn Hugo.  Evelyn agrees to reveal her life to journalist Monique Grant as an exclusive tell-all.  However, Hugo has her reasons for choosing Grant to tell her life story.

Evelyn chronicles her rise to Hollywood fame and infamy, her seven marriages, her love affairs, and the choices she made to become the mega star she desperately wanted to be.  On the surface, The Seven Husbands of Evelyn Hugo are salacious, gossipy, and all the things that pop culture has become as we are knee deep into the social media age.  However, Jenkins Reid provides a surprising depth with Hugo that loathed and intrigued at the same time.

These two quotes give Evelyn’s perspective on love that is profound:

When you dig just the tiniest bit beneath the surface, everyone’s love life is original and interesting and nuanced and defies any easy definition.

Words of wisdom from an unexpected place.  These quotes are bookends and to me drive the heart of the novel. The Seven Husbands of Evelyn Hugo will be classified as a beach read or an airport read by some readers.  However, the power of good fiction and storytelling is making a reader care about a character that you would loathe if they were a real person.  Taylor Jenkins Reid did that in spades in this novel and deserves major kudos.  Well done…..

It will be interesting to see whom Netflix casts when they film it.  I believe The Seven Husbands of Evelyn Hugo will captivate the small screen as it has in the commercial fiction world.