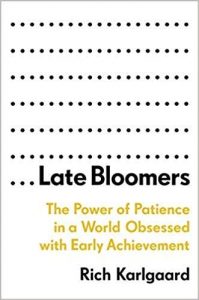 Sometimes there is a book on your shelf that is waiting to be read. The book waits patiently until you have gotten other books out of the way before you are ready to read it.  Late Bloomers by Rich Karlgaard is one of those books.

I bought this book shortly after it came out in April 2019. I had planned to read it as soon as I got it. But I did not. Other books demanded to be read.  However, Late Bloomers waited its turn and the time to read it came a couple days ago. Glad I waited to read Late Bloomers.

Karlgaard makes a powerful argument that society has ignored that late bloomers and human development happens at its own pace than what modern society prescribes.

“Many of us want to believe there’s a road map to how our lives should unfold. The reality, however, is that there’s no single right pathway for human development—-physically, cognitively, morally, or professionally.”

That paragraph lays out the crux of Karlgaard’s argument in the book and is one that I agree with wholeheartedly. I’m a late bloomer.  I did not get not my diploma after high school. I had to go to summer school to my GED to graduate from high school.  Also, I did not learn how to drive until I was thirty years old (I’m 48). I tried to learn to how to drive at sixteen and I almost ran my friend’s car into a house after driving his car off the road.  Reading this book made me realized that all the experiences I was supposed to have in my late teens to early twenties did not happen until much later.  I will admit that I thought something was wrong with me psychologically or socially. However, Karlgaard has shown me that human development is not one size fits all.  People develop at various stages of life and being a late bloomer has advantages that are not celebrated by society.

“Nearly all reasonably healthy people can bloom in different ways at different ages. To create a prosperous society of fulfilled individuals, it makes sense, therefore, to have a kinder clock of human development. Every person needs to have the chance—multiple chances, really–to follow their unique timeline of evolving brains, talents, and passions.”

Amen! Karlgaard brings home the point once again with that paragraph. Human development is not an exact science.  There is art involved and as society we need to allow for those that do not develop on the treadmill of high school-college-job to grow into who they are meant to become.  The path of fulfillment takes many paths, and late bloomers need the space to grow as people.

Late Bloomers is one of the most important books of 2020 for me. Finally, I found a book that resonated with me on several levels and will be a mainstay on my bookshelf.