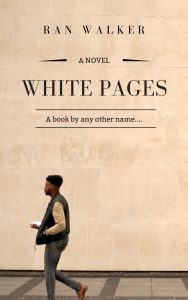 In a reading life, you will come across a novel that speaks directly to what you are going through. It is interesting that the power of a story can connect with a book that you read at the proper time.  This is the case with White Pages by Ran Walker.

Kamal Jackson is a young black novelist that has reached a fork in the road with his writing career.  He has published two novels to modest sales and written a third one he hoped would be his breakout novel.  However, his literary agent dumped him as a client and numerous publishers rejected the manuscript.  Kamal’s financial situation gets further complicated when he loses his adjunct teaching job at a local community college.

He comes up with a plan to refurbish his unsold third novel under the pseudonym of Kilgore Pickens. Pickens is an old white male writer from the state of Mississippi.  Kamal imagines him in the same vein of William Faulkner.  However, I immediately thought about Richard Ford while reading the novel.  Kamal comes up with a biography and backstory for Kilgore Pickens.  He resubmits the manuscript to one of the top literary agents in the NYC and gets signed as a client.  The novel gets sold for a mid six figure advance and receives a lot of publicity with the mysterious Kilgore Pickens being a new white male southern novelist destined for literary success and recognition.

Well, the truth will come out about Kamal’s pseudonym and the ramifications of the so-called deception.  Walker makes some keen observations about the publishing industry regarding to diversity.

“Kilgore Pickens did not have to entertain such headaches. He was an older white man from Mississippi and could write anything he wanted, however he chose to do so. His offbeat characters and simplistic writing style would be viewed as evidence of his recently excavated genius. Even more, his unwillingness to embrace the spotlight afforded by independent and chain bookstores, as well as literary magazines and the larger writing community, would quietly allow him to absorb an air of the mysterious, antisocial, yet wise, white male writer.”

Those two paragraphs hit home as a black writer.  Unfortunately, many readers want to put you in a box and expect you write inside those parameters to be authentic to your ethnic experience.  However, as a self-taught reader and writer and someone who has always march to beat of his own drum, you can not place my creativity into some neat box that can be easily digestible.

This comment from Kamal’s love interest, Yasmin in the novel brings home a larger point for any creative person no matter their ethnic background.

“As an artist, your voice is all you have, and people have to take it or leave it, but we can’t compromise our vision just to make ourselves more ‘palatable.’”

Indeed.  As a writer with a made-up fantasy world in Kammbia, I have to write authentically for the stories I want to tell in that world. That authenticity comes from living my adult life in South Texas and Northern New Mexico.  The people I have met in my nearly three decades in both places have informed my fictional world of Kammbia.  As a writer, you have to step into the elements that give your creative life passion.

I applaud Ran Walker for examining black identity, and how it affects the creativity of a writer.  White Pages is not the best novel I have read in 2020.  However, it is one of the most important novels I will read this year.  I’m glad that I found out about Walker from an email that I would have trashed immediately.  Serendipity is at work here.