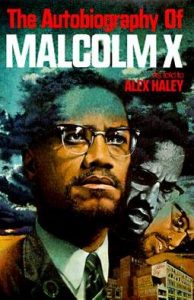 “Grace meets you exactly where you are and it doesn’t leave you.”

I heard the author Anne Lamott say this quote on the Tim Ferriss podcast a couple of days ago and knew this would be the opening sentence to my latest book review.  Grace would be the proper view about Malcolm X’s life after reading his autobiography, as told by Alex Haley. Grace has been co-opted on both sides of the religious/secular spectrum, but I think it is the proper word to use for a human being’s transformation during their lifetime.

I will admit that I don’t think I have anything profound or revolutionary to write about a book that has been considered life changing for many readers around the world. Malcolm X’s finally agreed to tell his life story about growing up in the Midwest, moving to Boston where he begins his gangster lifestyle, and how it caught up with him while living in Harlem and his transformation after getting out of prison and connecting with the Honorable Elijah Muhammad, leader of the Nation of Islam at the time and ultimately his separation from them and into a new spiritual awakening during his pilgrimage to Mecca. We have covered these aspects of his life many times over. I would like to share a few items that deeply moved me while reading his life’s story.

Anyone who has read a great deal can imagine the new world that opened. Let me tell you something: from then until I left that prison, in every free moment I had, if I was not reading in the library, I was reading on my bunk. My reading of books, months passed without my even thinking about being imprisoned. In fact, up to then, I never had been so truly free in my life.

I knew right there in prison that reading had changed forever the course of my life. As I see it today, the ability to read awoke inside me some long dormant craving to be mentally alive.

Malcolm X discovers how the power of reading can be a primer for the imagination, a stimulant for curiosity, and create a haven in place as dark as prison.  When I read that section of that book…I knew he got it and would forever change his life. The paragraph my augments my belief that one should read often and widely as possible.  Art is the best and safest place to feed that curiosity and a deeply rewarding facet of one’s life.

If the American black man will start thinking about his human rights, and then start thinking of himself as part of one of the world’s great peoples, he will see he has a case for the United Nations.

The American white man has so thoroughly brainwashed the black man to see himself as only a domestic “civil rights” problem that it will probably take longer than I live before the Negro sees that the struggle of the American black man is international.

Those last two paragraphs definitely come across as provocative in 1965 and still that way in 2021. However, I have always thought my perspective as an American black man was too narrow.  Thanks to reading and a few trips aboard to open up my world wider.  Malcolm X discovers the same thing in his life and sees the struggle of black folks from an international perspective.  Again, reading this section touched me deeply and augments my belief to keep widening my lens and connecting with people on a larger stage.

In closing, it is said when life gives you a blow that cuts deeply, sometimes a balm can come from an unexpected place.  This balm came from a book where an influential leader told his life story.  The power of story is universal and in the pages of The Autobiography of Malcolm X, human transformation is always available to those who seek it.  And if we give people “grace” to change their lives, the fruit will ripen at the right time.

The Autobiography of Malcolm X joins the very short list of the most important books I have read in my life along Invisible Man by Ralph Ellison, Before The Mayflower by Lerone Bennett Jr., Parable of the Sower by Octavia Butler, Home Is The Sailor by Jorge Amado, and The Book of Ecclesiastes from the Old Testament. Malcolm X’s life story is must read all for readers.