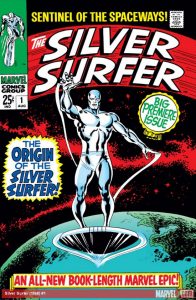 As a teenager, I had a huge comic book collection.  It was mostly Marvel and DC Comics with a few independent comic book publishers like Image, Dark Horse, and Valiant Comics. I read Avengers, Green Lantern Mosaic, Green Arrow, The Spectre, Sandman, and Icon (from Milestone Comics) during that time.  The Silver Surfer (along with Icon) were my favorite comic books. The cosmic super hero was different with his silver surfboard and philosophical musings about humanity that drew me in. Also, I always found his relationship with the world-devourer, Galactus intriguing and something worth studying in depth.

It has been awhile since I’ve read comic books. Prose fiction commands most of my reading these days, but I’ve always had a fondness to go back and re-read those Silver Surfer comic books from the late 1960s-early 1970s. Stan Lee has admitted publicly that he drew on his Judaism faith as inspiration for Silver Surfer and Galactus.  Also, in the Masterworks Collection, Volume 1 wrote that Silver Surfer was his favorite Marvel character, and those stories spoke the closest to his worldview.

I recently bought the Kindle version of Silver Surfer Masterworks Collection Volume 1 covering the first six issues of the original series from 1968. The first issue detailed the origin story of Norrin Radd from the planet Zenn-La. Zenn-La was a paradise until Galactus arrived and wanted to devour the planet in order to feed himself. Radd sacrificed himself to save his planet and was transformed into the Silver Surfer to find more planets to curb Galactus’ hunger. Silver Surfer discovered Earth and had a change of heart to keep Galactus from destroying it. Galactus imprisoned Silver Surfer to Earth, and he suffered from that punishment.

Lee’s writing has the over-the-top comic book style, but there is a deeper layer that’s worth exploring. How does one serve a God whose existence depends on destroying civilizations in order to survive? What makes one turn against your master to save humanity? Are human beings prone to self-destruction despite being helped by something bigger than themselves? Those questions came to mind while reading this first issue.

I plan the read the entire Masterworks collection of both volumes to learn more about Silver Surfer. Stan Lee has created one of Marvel’s most interesting superheroes, and the artwork of John Buscema fits the story. Buscema’s art is what I imagined The Silver Surfer to look like. Good storytelling comes from a variety of artistic mediums and the comic book format is just as valid as prose fiction, poetry, film or television.