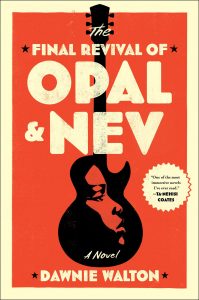 “The easiest thing in the world is to be yourself.

The hardest thing in the world is to be yourself.”

Those two sentences were appropriate for one of the two major characters, Opal Jewel, in Dawnie Walton’s excellent debut novel, The Final Revival of Opal & Nev. Walton told the story of the early 1970s punk rock duo of Opal Jewel and Nev Charles.  Opal was an unconventional, outspoken black woman from Detroit and Nev was a white singer/songwriter from Birmingham, England. Nev discovered Opal in a bar on amateur night and the two began a journey into near rock-n-roll fame and infamy.

Years later, Opal was considering having a reunion with Nev and music journalist S. Sunny Shelton wrote a book about the duo. Sunny thought knew most of the stories about the duo’s musical journey, but learned that Nev’s outspoken and frank nature caused an incident that derailed their chance at stardom.

The story is told from Sunny’s perspective as she interviews everyone involved with Opal and Nev at that time. Also, she learns her father’s connection to Opal and his tragic end at the incident that nearly destroyed the duo’s career.

The Final Revival of Opal and Nev read like a music documentary film in book form.  Opal reminded me of Grace Jones and Nev Charles brought to mind George Harrison. The story revealed how the racism and sexism of the time wanted to keep a woman like Opal in a prescribed box for the white audience. This quote from Sunny’s father brought home the issue with labels:

“The music itself don’t have a color. It’s a continuum that starts with the drum & branches out from there. The industry and the money, that’s what can mess everything up. See, this is what I say about America–we always gotta be assigning shit, always labeling it and stuffing it in a box. Always dictating who’s allowed to own what. But end of the day, that don’t have nothing to do with the music, you dig? The music is fire and passion and soul, and however you express it is how you express it.”

That rant might be crude but there’s wisdom in those words and when you are a trailblazer, you will always resist being labelled and packaged for easy entertaining consumption. Opal learns that the hard way while Nev has a successful solo career and reap the benefits of his privilege.

The Final Revival of Opal and New was honest, raw, and profound. I rarely jump on new books, but I’m glad I trusted my reading instincts and read this novel.  It is my favorite read of 2021 so far and I highly recommend it.  Bravo Dawnie Walton!!!