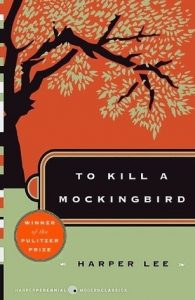 I’m a regular podcast listener and one podcast I have become a fan of is Black & Published hosted by Nikesha Elise Williams. The most recent episode I listened to was with author Maurice Carlos Ruffin. Ruffin is a native of New Orleans and the podcast episode spent most of the time talking about his books, We Cast A Shadow (a novel) and The Ones Who Don’t Say Who Love You (a short story collection). Also, they talked about how the city of New Orleans has shaped his writing.

However, my favorite part of the podcast came towards the end where Nikesha asked him several questions that got the author to thinking.  One of those questions was, what book would you like to have rewritten?  Ruffin chose To Kill A Mockingbird by Harper Lee. He explained how the black characters in that novel were one dimensional and that Lee could have explored their presence in the novel with more detail and nuance.  I totally agreed with Maurice’s assessment of this modern classic.

I have read To Kill A Mockingbird twice and always felt that Lee left a lot of meat on the bone in terms of Tom Robinson and Calpurnia in the novel.  Tom Robinson was the black man accused of rape and Calpurnia was the maid for the Finch family in the story.  I understood Lee told the story from Scout’s first-person protagonist’s perspective and her viewpoint as a child did not have a wider lens than an adult in a similar position.  However, I would like to have seen a lot more towards the black characters who play an important role in Lee’s beloved novel.

To Kill A Mockingbird deserves its place as a modern American fiction classic. Lee tells a very good story and does some things from a first person’s protagonist perspective that writers can learn from.  But, there is a blind spot in the story that could have made a much deeper connection across racial lines.  I’m glad that Ruffin pointed that out in the podcast.  I would like to ask what other modern classic novel do you believe could have been rewritten?