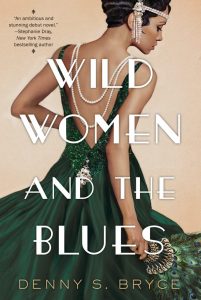 If you live to be 110, how would you look back at your life?

The protagonist of Denny S. Bryce’s debut novel, Wild Women and the Blues, gets to answer that question. Honoree Dalcour is in mid-1920s Chicago during the heart of the jazz age where her ambition to make a name for herself as a dancer runs smack into the gambling, drinking, and gangster culture of that time.

Fast forward to 2015, she is at a nursing home where a film student name Sawyer Hayes is coming to interview her as the last living connection to legendary African-American filmmaker Oscar Micheaux. He is trying to put together his thesis about the filmmaker and learns more than he bargains for about Honoree’s life.

The novel switches back and forth between the two timelines and weaves the story of Honoree’s life in surprising ways. As a reader, we learn about the highs and lows of her life and how she could survive during such a volatile era. Bryce does an excellent job of bringing mid-1920s Chicago to life and I felt were the strongest parts of the novel. Honoree grew as a character and a woman’s ambition that would have seemed “uppity” for the time would serve her well.

Sawyer reveals his past to Honoree in piecemeal fashion and learns about a family connection that he had never known before meeting the dancer. The story does a solid job showing how family secrets can have a devastating effect on a family and the truth will always set you free, no matter how much pain or discomfort it reveals.

The movie Chicago will come to mind in this novel for some readers.  But I think Bryce creates a fictional world I had not read in fiction since Toni Morrison’s Jazz. Wild Women and the Blues will be one of my favorite reads of 2021. Historical fiction readers and fans of musical fiction should definitely check it out.