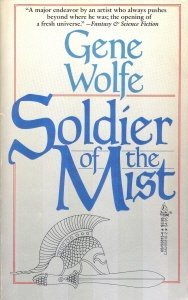 What is it about memory loss that can make for a compelling story?

Gene Wolfe decides to tackle memory loss in his 5th Century Greece historical fantasy series starting with the 1986 release of Soldier of the Mist. Soldier of the Mist tells the story of Latro, a mercenary soldier who has suffered a head wound in battle and has been separated from his comrades.

Latro has lost the ability to remember who he is on a daily basis and only has a scroll that he writes on for assistance. In compensation for his memory loss, the soldier can talk to gods, goddesses, demons and other supernatural beings with regularity.  He seems to have the gift of clairsentience.

Wolfe writes an intriguing and interesting story in Soldier of the Mist that will take multiple readings to fully comprehend its theme.  And his use of the unreliable narrator for the protagonist was in full effect throughout the novel.  However, I could only enjoy Soldier of the Mist on a intellectual level and not an emotional level.

I’m a Gene Wolfe fan and have read several other of his books like Pirate Freedom, The Land Across, Knight (Book 1 from the Wizard Knight Duology), and the excellent novella, Seven American Nights. Wolfe is an acquired taste and his reputation as a writer’s writer is confirmed in Solider of the Mist.  I will not continue on with Latro’s story in the rest of the series, but I’m looking forward to reading Sorcerer’s House and Wizard (Book 2 of the Wizard Knight Duology) instead.