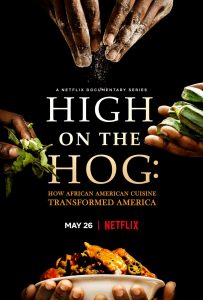 The miniseries hosted by food writer, chef and sommelier Steven Satterfield as he travels to Benin, West Africa, as well as around the United States from Charleston, South Carolina to Apex, North Carolina, to Philadelphia, New York City, and Houston, Texas.  These episodes showed the diversity of black cuisine from the true origins of yams, sweet potatoes, okra, collard greens, gumbo to barbecue.  Also, the show revealed an unknown fact of American History that President Thomas Jefferson had a black man, Thomas Hemings, on his Monticello plantation in Charlottesville, Virginia as his primary chef.

My favorite episodes were the first one when Satterfield travels to Benin, West Africa and explores the richness of African cuisine and how it is connected African American Cuisine especially with okra and yams. Also, Satterfield has an emotional experience when he walks the road in Benin where the slaves traveled before being put on the ships to the Americas.  Deeply moving and powerful.

The last episode brought him to Texas where he explored the Juneteenth Holiday and the Black Cowboy tradition in the Lone Star State. This was my favorite episode.  Even though I was born and raised as a Floridian, I have always loved the State of Texas.  It is the largest state in the continental forty-eight states.  Also, Texas has always seen itself as an independent state in the union.  Satterfield explores the black contribution to the Lone Star State by the way of barbecue and now I have several road trips to make in the future.

In closing, High on the Hog examines how American black cuisine has had a major imprint on American Cuisine. I’m so delighted that Netflix allowed a miniseries like this to be brought out for public consumption. I hoped those of you who are non-black watch this miniseries.  This is not only about African-American culture but American culture too. We need this history to be shown to everyone. I hope this opens the door for a TV series to showcase Hispanic, Native American, Japanese, Chinese, South Asian Americans to tell their cuisine stories too. Real diversity allows these types of stories to be shown and we all will be the richer for that experience.  High on the Hog is the best TV miniseries I have watched in 2021 and I will give it my highest recommendation.