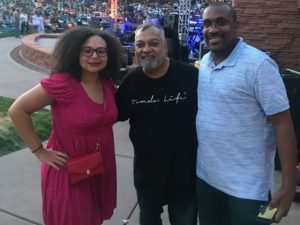 My wife Jessica and I went to Las Vegas in April 2019 for a mini-vacation. Most people go to Vegas for gambling, food, and shows. However, I went to Las Vegas to see my favorite band, Incognito. I’ve been a fan of Incognito since the early 1990s when I heard the band live in Atlanta, Georgia.

Incognito was performing at the Las Vegas Jazz Festival, and we got a picture with the bandleader and creator of the group, Jean-Paul “Bluey” Manuick.

Here’s what I wrote on my personal Facebook page after meeting Bluey and spending a few minutes with him after their performance.

“I was asked recently why I like Incognito so much. Last night’s concert was a reminder. Bluey’s vision of “One Nation or One World” under a groove was on display. He has a drummer from Italy. A percussionist from China. A guitar player from Portugal. A bass player from Jamaica. A saxophone player from England. A trombone player from Scotland. And singers from Baltimore, Trinidad and Tobago, and Sri Lanka. All of these people are in the band. And to hear them play Black American soul and jazz music with their own stamp and pay respects to the traditions of this music is why I love this band so much.

To hear this kind of music played so well by people outside of America shows that people can come together, and art can lead the way. Thank you, Bluey, for 40 years of great music, and I’m glad that I traveled to Vegas to see it live once again. You have created a true multicultural vision in the best sense of that word. You have my deepest admiration and respect as an artist. The world is a lot smaller because of your music. I’m for anyone that can bring people together instead of dividing them.”

In my opinion, Incognito is this generation’s version of Earth, Wind, and Fire. Their music has a universal quality that has kept me as a fan for over 25 years. Incognito’s popularity is bigger in Europe and Japan, but I’m one of their many growing fans here in America. I wrote a post a few years ago about why I’m a fan.

It’s hard to pick one song to represents the band’s music. But, I will try with “Did We Really Ever Try,” from their 2002 release, Who Needs Love. The song is about a failed relationship and how miscommunication was at the heart of what went wrong.

If you are a fan of old school R&B and jazz, then check out Incognito.