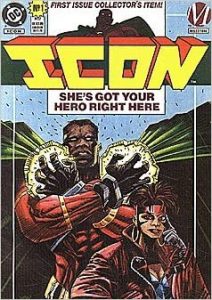 In 1839, an alien spaceship approaches Earth.   A pod from that spaceship is ejected and heads toward the planet.   It lands in a field and creates an explosion.  A slave woman notices the pod and finds a little black boy inside.  The little boy is Augustus Freeman and his life on earth begins.

Fast forward to 1993, Augustus is a high-powered lawyer in the city of Dakota.  He is getting a feeling that he needs to do more for people of the city.  However, Augustus is a believer in the Booker T. Washington philosophy on how black people should pull themselves up by their own bootstraps.

Meanwhile, Raquel Ervin dreams of becoming a writer like Toni Morrison but doesn’t know where to start.  She is hanging out with her friends when they decide to break into a mansion on the wealthy side of Dakota. It surprises them to find the homeowner is at home, and Raquel learns a valuable lesson.

She meets with Augustus and challenges his belief in pulling oneself up by their own your bootstraps. Freeman takes her comments to heart and decides on an alternate path for his life as Icon.  However, on his first outing as a superhero, Icon is reminded of his place in society, and a black man with power can never truly transcend the status that has been assigned to him by the white establishment.

I appreciate Dwayne McDuffie (Rest in Love) showing an even-handed picture of black conservatism and not turning Freeman into a caricature.  Also, his relationship with Raquel (who will become his sidekick Rocket) adds a unique aspect to his role as Icon.  This origin story has some parallels to the Superman origin story, but Icon is different and I’m looking forward to re-reading these remaining forty-one issues to find out how.

I grew up reading comic books and they became my first entry point into becoming a lifelong reader.  I don’t think I would have ever become a regular reader of prose fiction without my time as a comic book reader.  One of my favorite comic books I read in my early 20’s was Icon from… END_OF_DOCUMENT_TOKEN_TO_BE_REPLACED