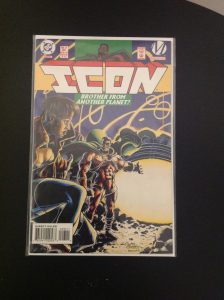 Independent filmmaker John Sayles released Brother From Another Planet back in 1984.  The movie tells the story of a visitor from outer space played by the great actor Joe Morton, who looks like a black man. He arrives on Earth in a spaceship that looks like it is something from the 1950s sci-fi stories by Robert Heinlein, Frederik Pohl, or Arthur C. Clarke. It is not a great movie but Sayles examines how a black man can appear out of step with the culture of it’s time. I will admit that as someone who has not fit into the box that contemporary American culture has prescribed for people who look like me that I can identify with Sayles movie.

Icon falls into that same category and I found out that it was a favorite read of Supreme Court Justice Clarence Thomas raised my eyebrows. However, I have learned over the years that human beings have deeper layers than the political, cultural, or religious ideology they get labeled as such.

This issue is where Icon shares his full background with Rocket. She is surprised to find out that he lived during Reconstruction and fought for the Northern states during the civil war, helped slaves escaped to Canada with the Underground Railroad, graduated from a black college at Fisk University in Nashville, Tennessee, married his wife during the height of the Harlem Renaissance, and fought with the Allies against Nazi Germany during World War II.

Rocket learns that Icon is truly alien and coming to Earth as a black man was not his choice.  However, he has embraced it and made the best of the situation. I wrote previously that issue 7 was my favorite so far in my re-read of this series. I have to correct myself and write that issue 8 is my favorite. Icon has more depth to him that being labeled as a black conservative who has sold out his people.  It is reminder to not judge people by what they present to the public but find out more about them and don’t discard anyone immediately.