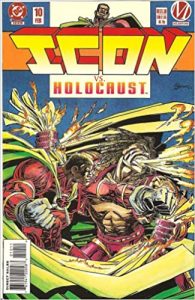 Rocket apologizes to Icon for connecting with Holocaust.  She learns that Holocaust wants to control the city of Dakota.  Icon confronts Holocaust and two dialogue about the role of the Big Bang and how it has affected the city. That dialogue leads to a confrontation revealing who is the best between the two.

This issue ties up the story arc with Holocaust and adds more bread crumbs to how the Big Bang affected the city of Dakota.  Icon is determined to find out the truth of what happened during that major event but there will be numerous roadblocks along the way. Moreover, can Rocket be a mother and superhero simultaneously?  I’m looking forward to reading on as the two more forward in the series.

It is wonderful to re-read a comic book series that deals with teenage pregnancy, abortion, and issues of the inner city in an even-handed and thoughtful manner. Unfortunately, we live in a culture where the extreme views of both sides of the coin is lauded and celebrated. However, there is always shades of grey and that’s where life truly reveals itself. Onto to Issue 11.