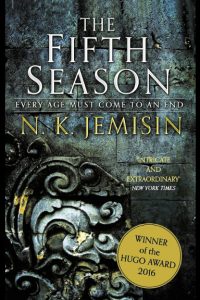 After reading this first book of The Broken Earth Trilogy by N.K. Jemisin, I have crossed two reading rules that I thought I would never break:

Well, The Fifth Season broke both of those rules for me. I did not liked or related to any of the characters in this well-regarded, post apocalyptic fantasy novel.  However, I thought the world-building (an essential element in imaginative fiction) was outstanding and the characters were intriguing to keep me interested into finishing the novel.

The story takes place on an alternate earth called the Stillness, which is tormented by seismic activity. This leads to frequent near-extinction events called “Fifth Seasons” that keep people on pins and needles. The evidence of prior civilizations are scattered throughout the planet — ruined cities, incomplete ‘stonelore’ passed down from previous generations, and strange obelisks that float through the atmosphere like low-altitude satellites and serve no purpose. The civilization that we meet in the novel, the Sanze Empire, has survived for a long time by siphoning the power of orogenes — people born with an innate ability to control their environment. The orogenes can start or stop earthquakes. They can save cities, or gain power from living creatures and “freeze” them. Their powers are horrifying yet essential, so the empire develops a caste of Guardians who have the power to neutralize the orogenes when necessary. The orogenes are held in contempt and called “roggas” by ordinary humans. Despite all their power, they cannot control their own lives. They are either hunted down and destroyed or sent to the Fulcrum to be trained and used by the empire.

Jemisin tells the story through several characters and creates an interesting, multicultural world unlike anything I’ve ever read from a work of imaginative fiction. Representation comes in various ways and Jemisin crosses all types of boundaries in this story.

The Fifth Season is not an easy read and it does take at least 50-60 pages to get a handle on what’s happening in the story. Also, she uses a second person narrator that creates distant style of storytelling that is jarring upon a first reading.  Despite those reading challenges, I can see why this novel (and the subsequent books) have received so much praise and recognition in the science fiction and fantasy world. I will admit that I did not love this book from a pure reading enjoyment experience.  However, I did respect Jemisin’s imaginative storytelling skills and will continue on reading the rest of the trilogy.  There is a difference between reading a work of fiction that becomes a favorite than one which becomes one of importance.  The Fifth Season is the latter part of the prior sentence and I can appreciate the work on that level. Well done, N.K.