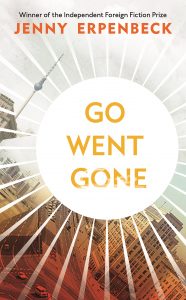 This paragraph came from my latest novel, Diondray’s Roundabout. The protagonist, Diondray Azur, reads a themily  (a collection of thoughts written on a single sheet of paper meant to inspire, encourage or admonish the reader’s audience) to a huge crowd the city of Terrance set in the world of Kammbia.  Diondray has traveled through the southern half of Kammbia and Terrance is the last stop of his journey.  He realized that connection and division from people are two sides of a coin. Well, I thought this passage from my novel summed up how I felt when reading Go, Went, Gone by Jenny Erpenbeck.

Go, Went, Gone is the story of a retired German professor, Richard, who has settled into a comfortable retirement.  However, he came across a hunger strike by African refugees in Berlin’s main square, Alexanderplatz. Richard became curious about these men and learned why these Africans staged this hunger strike.

Richard connected with several of the Africans and acknowledged he had a lot more of common with these men than he would have ever thought. There was one connection he made with a young man named Osarobo from Niger that grabbed my attention the most throughout the novel.  Richard and Osarobo developed a bond from the love of the piano and a surprising twist from their connection near the end of the novel revealed how perilous any human relationship could be.

Erpenbeck challenges the politics of German immigration policy in this novel and shows through various characters the biases that first world people have towards those from third-world countries.  Also, she does not shy away from the racism of Germans towards the African refugees.

However, I connected with this novel through Richard and his relationships with the refugees.  He stepped out of his comfortable retirement and tried to do whatever he could to help these men and their tenuous situation in Berlin.  This novel has made look at refugees and immigration in a new light in a similar fashion like Exit West by Moshin Hamid.

Gehen, Ging, Gegangen is one of my favorite reads (along with the first two books of The Long Price Quartet by Daniel Abraham) of 2019 so far.  Jenny Erpenbeck has written an important and timely novel that brings to mind Jesus’ words from the New Testament in Mark 12:31, “The second is this: ‘You shall love your neighbor as yourself.’ There is no other commandment greater than these.” (ESV Bible).  Highest Recommendation.