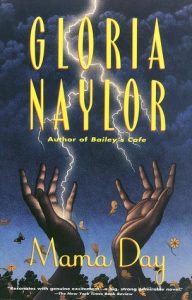 I have always been more of a backlist reader than a new release reader.  There are so many books published, and it is impossible to keep up as a reader.  However, on social media and throughout the publishing world, the new release books especially in fiction are celebrated and promoted.  I totally get it.  There is nothing like a new book in your hand or on your eBook device as a reader.  There is something about newness that creates anticipation and excitement.

However, a solid novel like Mama Day by Gloria Naylor will get overlooked because it was published in 1988. On the surface, it would be considered a book of its time and not reflect our current world in 2021.  One of the major things I love about reading is that a good story can transcend its own era and connect universally with what it means to be human.

Mama Day is a novel of both character and setting.  Ophelia Day (aka Cocoa) is the protagonist and tells the story of leaving her birthplace of the Georgia Sea Island, Willow Springs, in order to become a modern woman in New York City.  Also, Willow Springs is a protagonist in the story and plays a prominent role when Ophelia returns with her husband, George, a well-off business person she met during a job interview.

The daily life of elderly Mama Day and her sister, Abigail were told in the story and their connection to the slave woman from whom the Days descended was established. Naylor drew well from the spirituality, mysticism, and eccentric characters of the island, and reading the story pulled me into that world.

Some say that Naylor was inspired by Shakespeare’s The Tempest. I have not read The Tempest and can not make a claim how much of an influence Naylor gained from it in her novel. However, Cocoa and George’s relationship definitely has a tragic outcome and did not catch me off-guard as a reader.

I totally enjoyed novels with a great setting, and Naylor delivers that well with Willow Springs. The strength of her writing kept me engaged despite my ambivalent feelings about Cocoa and George. Mama Day is considered Naylor’s best book and deserves to be more known amongst readers of the social media age.  She does not get mentioned as one of the great black women writers like Toni Morrison, Alice Walker, Edwidge Danticat, Octavia Butler, or Chimamanda Ngozi Adichie, but Gloria Naylor belongs in that company and Mama Day is her entry point to that type of status.