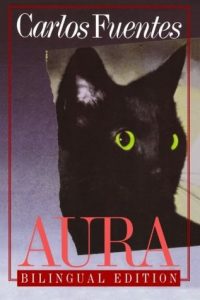 Carlos Fuentes is a writer that I have wanted to read for a long time.  I have seen his books, The Old Gringo & The Death of Artemio Cruz, in used bookstores for years.  I have always meant to get one of those books, but never did.  However, I read an online review about Aura last week that finally gave me the push to read Fuentes.

Aura tells the story of a scholar named Felipe Montero who is hired by a widow to write a memoir about her deceased husband, General Llorente. Felipe is taken by the widow’s niece, Aura, and wants to win her love. But, the widow has a strange but undeniable connection to her niece and Fuentes unfolds it in a distant but haunting fashion.

Felipe is trying everything he can to win Aura’s love, but learns that one’s true identity can be complicated and unexpected.  Fuentes seems to make a statement about beauty, aging, and how the passion of love can cloud your reality. I will admit that the second-person viewpoint creates a distance that appeared off-putting when I first started the story, but by the end, I believe it was the right viewpoint for the story.  If Fuentes would have used first-person protagonist or third-person viewpoint with shifting narrators, then the story would have lack the distant lens needed for the novella.

Some stories grab you immediately and you ride along as a reader for the journey.  Other stories unwind over the course of the story and you have to trust the author to nail the ending.  Fuentes does that with Aura.  Even though the novella came out in 1962, it did not feel dated and six decades later, after publication, still has relevance.

I’m planning to read the aforementioned Fuentes books and Mexico’s foremost man of letters will be in my reading rotation from now on.  Bravo Carlos Fuentes!