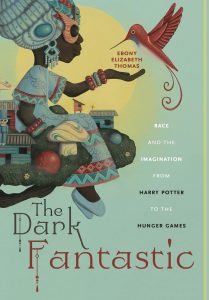 “The principles of the dark fantastic are so ingrained in our collective consciousness that when the expected pattern is subverted, most audiences cannot suspend disbelief. Readers and viewers complain that dark heroic protagonists are not likable. Critics observe that the characters, settings, circumstances, and resolutions are unbelievable. Agents regret that they just cannot connect with the characters.  Television and movie studios, as well as publishing houses, tell writers that their stories are not marketable. Thus, whether the story in question is a novel, a television show, or a graphic novel, the Dark Other remains caged.”

This paragraph hits home as someone who loves (and writes) imaginative fiction for most of my life. My definition of imaginative fiction includes fantasy, science fiction, horror and the subgenres associated with them. I have created my own fictional worlds since childhood and it was my place of escape from the realities of growing up in the late 1970s-early 1980s as a black kid from St. Petersburg, Florida. I’m forever grateful for my mother, who understood this need I had to create my own stories that featured people from various backgrounds. However, I had a family member tell me that only white people may imagine the future or fantasize about a world that reminded them of Medieval Europe. That comment has always felt wrong to me and has sent me down a path to do my part to change that paradigm.

It is a welcomed sight to find that a book like The Dark Fantastic by Ebony Elizabeth Thomas exists to corroborate my innermost feelings to my relative’s myopic comment. Thomas examines the role race and the imagination intersects in four of the most popular fantastical works brought for public consumption in the past twenty years: The Hunger Games, Merlin, The Vampire Diaries, and Harry Potter. Each of these works has a black female character that plays a groundbreaking element to their stories but is still problematic regarding the trope of the Dark Other and its manifestations through the lens of the White Imagination.

Thomas argues that manifestation of the Dark Other reveals itself in several factors that includes self-sacrifice for the white main character, violence against this dark person in an imagined white world, hesitation to embrace a person of color as being worthy, and unrelatability of seeing a person of color in a context outside of the slavery-civil rights-ghetto paradigm. She shows through Rue Everdeen from The Hunger Games, Guinevere Pendragon from Merlin, Bonnie Bennett from The Vampire Diaries, and Hermione Granger from Harry Potter how those aforementioned factors reveal themselves in both subtle and overt ways. What hurts the most as one who prefers imaginative fiction over realistic fiction is how people can suspend their disbelief to acknowledge dragons, unicorns, and monsters in a book or movie but not a person of color in a nontraditional role outside the aforementioned paradigm.

The Dark Fantastic is a much needed book, and the author’s argument needs to be examined carefully and constructively to make genuine changes for imaginative fiction on the whole. In closing, I want to state that representation is not just about reading someone in a book or seeing on the screen that looks like me. It is about seeing someone in the full range of their humanity and not the box that society has placed for people who look like me. Thomas’ book begins the process of the emancipation of the imagination and it is about darn time. Also, I love the cover.