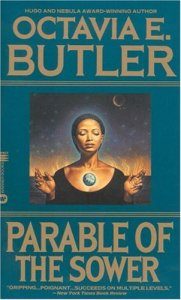 That’s the question I’ve been coming to terms with after reading Parable of the Sower by Octavia Butler for the third time recently. Parable of the Sower is on the shortlist of my all-time favorite books that includes Invisible Man by Ralph Ellison, Home is the Sailor by Jorge Amado, The Little Country by Charles de Lint, Winter’s Tale by Mark Helprin, and the Book of Ecclesiastes from the Old Testament. Each of those aforementioned books I have read multiple times throughout my adult life and Parable of the Sower is no exception.

I have already written reviews about this novel on my blog several times previously.  I will not write a normal review for this blog post. However, Parable of the Sower tells the story of Lauren Olamina’s journey growing up in a dystopic, suburban Los Angeles gated community with her father who is a minister, her stepmother Corazon, and her brothers.  Lauren is forced to leave the gated community after those from the outside break in and ravage everything insight. Lauren loses her family and travels north to make a new life for herself under dire circumstances.  Also, she develops a pseudoreligion called Earthseed, which has the foundational principle:

All that you touch, you change.

All that you change, changes you.

The only lasting truth is change.

Lauren’s foundational principle sets up the theme of the entire novel and is prophetic.  Change is inevitable in human life, but her concept of adding God as change is still radical after reading this novel for the third time.

Many readers have commented on the novel’s environmental and social concerns alongside of Lauren’s pseudoreligious beliefs for still being relevant for nearly three decades after being published.  While all of those elements make it one of the best dystopian novels ever written, the reason it is one of my all-time favorite novels is because of the multicultural landscape that Lauren grew up in.  Lauren’s stepmother is from Mexico.  Her neighbors in the gated community were from various ethnic backgrounds and Butler created an organic diversity amongst the characters that I had not seen in both literary or genre fiction when I first read it in 1993.  Even in 2021, despite the gains in representation throughout the publishing industry, the organic diversity in Parable of the Sower is still the best portrait of what inclusion should look like without having to call attention to itself.  Butler understood, on a basic human level, people will form community across racial and ethnic lines despite the harshness of their daily lives.  Also, love and sex will always break social mores whether it’s accepted by the mainstream society or not.

Reading for me has always been about a story that I can connect with on an imaginative level and characters that I can take part in along their journey. Parable of the Sower succeeds on both levels for me as a work of fiction and seeing a young black woman in a non-traditional role has been a major inspiration for my own fiction and given me as a vision to tell stories with a multicultural lens.  That has been Butler’s greatest gift to me as a writer and storyteller.  And the fact it comes from such a bleak book shows the power of reading being able to transcend our normal biases and open up your world in a whole new way.  In closing, I have concluded that an all-time favorite novel has to be one that you can read and read again throughout various stages of your life.  Also, a story that you can gain a new perspective from each time you read it.  Parable of the Sower passes that reading litmus test and it will always be an all-time favorite novel.