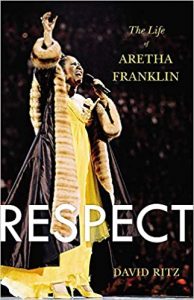 Sometimes after reading one book will make you want another book with a similar topic. My previous review was a fictional music documentary in a novel titled The Final Revival of Opal & Nev by Dawnie Walton. Opal Jewel was one half of a groundbreaking punk rock duo from the early 1970s that nearly made into superstardom.  However, Opal’s diva behavior and Nev’s self-destructive tendencies kept the duo from reaching their full musical potential. The book portrayed Opal as a diva, and her character kept me reading this excellent debut novel. Immediately after finishing it, I wanted to read a book about a real-life diva and came across Respect: The Life of Aretha Franklin by David Ritz.  Ritz had written several musical biographies, the best known was Divided Soul about Marvin Gaye.

I had to admit that I knew little of about Aretha Franklin outside of her most popular songs like Respect (an Otis Redding song), Chain of Fools, Rock Steady, & I Say a Little Prayer (my favorite of her songs). In reading Respect, I learned Aretha was a musical genius.  Unfortunately, we as a society don’t give women the genius label often. Of course, there was the obvious reason of sexism behind it.  And that was a shame. If a human being (man or woman) was worthy of such a label, then we should give it without hesitation.  Aretha Franklin deserved to be called a musical genius without a doubt.

I know that most biography readers want to read about that famous person or artist’s personal life.  Who were they behind their gift and matched their public persona?  Well, I did not want to read Respect for those reasons at all. I’m fascinated by human creativity and how an artist creates their art.  Those elements of Respect were much more interesting than Aretha’s tumultuous personal life.  I have to admit that tumultuous was the exact adjective to describe Aretha’s life outside of music.

I will mention that she was a teen mother with two boys before the age of eighteen, went through two failed marriages, had a fear of flying, and rocky relationships with everyone close to her, including her talented sisters, Erma & Carolyn.  However, she was a daddy’s girl and her father, Reverend C.L. Franklin, had a major influence throughout her life. All of those stories were throughout the book, and there was plenty of meat to chew on for those who are interested in those details.

This quote near the book by songwriter-producer Gordon Chambers got my attention:

“When I arrived at her home studio in Detroit, she was at the piano practicing. I discovered that she not only learns the song by listening to the tapes, but she actually works out the song on piano. That’s how she’s able to Aretha-ize it. In her golden era, she may have sung more full-out from her chest and was now singing more from her head, but she knew how to make that adjustment flawlessly.”

Aretha was a singer’s singer and musician’s musician.  She was probably the greatest interpreter of songs that America has ever produced. She did not know how to read or write music.  But, she could transform any song from gospel to jazz to R&B to Opera and make it her own.  That was pure genius, and I wanted to know more about that than the previously mentioned personal life stuff.

Respect: The Life of Aretha Franklin is an excellent music biography of a complex musical genius.  The book shows her flaws and resilient nature in detail.  I have always thought that Whitney Houston was the greatest singing talent I’ve heard in my lifetime.  I had to reassess that declaration after reading this book and listening to Aretha’s music (especially her jazz material) over the past few days. Her rendition of the classic tune, Skylark made me stop what I was doing the other day and just listen her voice command the song.  She was special and an American musical treasure. I’m glad that I read this biography.  Rest in Love, Aretha!