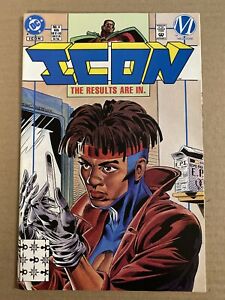 Icon tells Rocket she is pregnant. Rocket can’t believe it but decides to take an over-the-counter pregnancy test to make sure.  As readers, we all know what the answer will be. Rocket sees her life flash before her eyes as she talks with her best friend about it how could happen.

Meanwhile, Icon continues on his honeymoon period of heroism with the city of Dakota. But, he decides to follow up on the claims from human turned monster in the previous issue and begins his investigation on that nearby island. Of course, when the city government wants to keep something a secret they will go to great lengths to maintain that secrecy.  Even a superhero like Icon will run into a political brick wall.  Moreover, his snooping alerts a superhuman group that protects the island named Blood Syndicate.   Icon gets a little taste from the group in this issue but there will be more to come on that front.

Issue 4 was the first comic in the series I connected to when I first read it in the early 1990s.  Teenage Pregnancy became a hot button issue in American pop culture at the time. Politicians on both sides of the aisle made patronizing public statements about the issue.  Celebrities added their two cents to the issue. However, a young adult having a child is nothing new. It’s been happening since the beginning of time.  It’s not a death sentence for a better life but does make it more complicated.   There is always ramifications from what happened to cause a pregnancy.

I appreciated that the writer Dwyane McDuffie wanted to tackle this issue inside of a superhero comic book. It revealed that imaginative storytelling can take on real world issues and provide insight that does not always get credit from those who believe realism in fiction is the gold standard.  Also, it added depth and a freshness needed in the superhero genre.

If Rocket is pregnant, will she keep the baby?  How can she be a partner to Icon if she has to raise a child? Will Icon’s conservatism accept this life-altering event from his partner? Those questions will provide fertile ground for storytelling that I’m looking forward to finding out during this re-read.