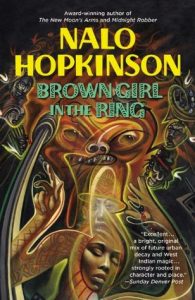 Nalo Hopkinson is an author I have wanted to read for a long time.  I have seen her novels over the years but had not gotten around to reading one until now.  Hopkinson tends to get overlooked in the current trend of black authors writing science fiction or fantasy. I don’t why that has happened, but I hope readers will give her a chance going forward.

Brown Girl In The Ring tells story of Toronto in decay.  White flight has taken place on a massive space and the city proper is left to crumble.  However, the people that live in the city limits have found a way to survive and even thrive in some cases. The story focuses on a young woman named Ti-Jeanne and her newborn baby that she has not named.  She lives with her grandmother, Mami and is trying move on from the baby’s father, Tony.

Tony is caught up in the streets and runs afoul of a man named Rudy.  Rudy is connected to magical powers that keeps his followers in line and no one dares to cross him.  Tony does and puts Ti-Jeanne and her grandmother in jeopardy. Ti-Jeanne knows that her grandmother is connected to same source of magic as Rudy and realizes there is a deeper connection than she has known.

The story plays out as a family drama and we find out that Ti-Jeanne has her own connection to those same magical powers as her grandmother.  Also, there is a subplot where a politician is having heart surgery and begins to have a change of heart on how the city proper of Toronto should be governed.

Brown Girl In The Ring reminds me of Parable of the Sower by Octavia Butler in some ways with the decay of a major city and a young girl as the protagonist.  However, Hopkinson takes this story into a different direction and draws on her Caribbean heritage to make it unique as a fantasy novel.  The story is quite violent and could be a trigger for sensitive readers.  However, I could not stop reading it.

Lastly, Hopkinson employs Afro-Caribbean dialect throughout the novel and it will take an adjustment getting through the book.  I know how that can take a reader out of a story.  I would recommend that you stick with it and I can assure that you will get use to the dialect if you keep on reading the novel. Brown Girl In The Ring is a solid debut novel and Hopkinson is a good storyteller. I will admit that the violence in the story was a little over the top but the Caribbean magic and folklore made it worthwhile to read.