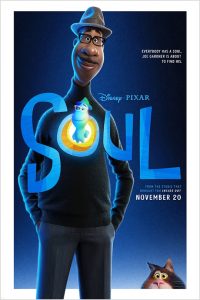 They released the animated movie Soul today on Disney Plus. I had seen the previews recently and was looking forward to watching the movie. It did not disappoint at all.

Soul tells the story of jazz musician Joe Gardner (voiced by Jamie Foxx). He is a part-time high school band teacher trying to make a living but dreams of having one more chance at becoming a professional musician. Gardner is an extremely talented piano player and gets an opportunity to play with bandleader Dorothea Williams (voiced by Angela Bassett) and finally achieve his dream.

After his tryout with Dorothea, Gardner falls down a hole and is sent to a world where his life appears to end. Joe is determined to get back to Earth in order to pursue his big shot with Dorothea. However, he meets a being that seems to be a lost soul named Number 22 (voiced by Tina Fey).  Gardner is assigned to mentor her in an attempt to find a purpose for her life. Well, things go awry and the two of them begin the journey of self-discovery and what it means to be human.

The movie got somewhat esoteric with the story line beyond Joe’s everyday life. However, I thought it brought a deeper meaning on what truly matters in our lives. I really enjoyed this movie instead of a typical Christmas film. Also, I appreciated that jazz music and African American culture played a significant role in the movie that did not resort to stereotypes. The characters were solid (especially Joe Gardner’s mother) and kept the film on task despite the big topics it tried to address. I highly recommend Soul as a film the entire family can watch.  We needed a positive, life affirming movie to end one of the most challenging years I could remember.