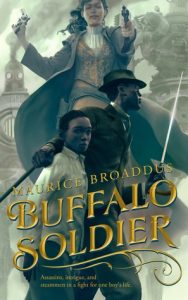 Buffalo Soldier by Maurice Broaddus tells the story of Jamaican agent Desmond Coke and his companion, Lij Tafari. They are on the run and Desmond wants the boy to have a normal life, but it seems unlikely because of those who want to capture Lij for nefarious reasons.

This alternate history tale has the United States split into smaller nations like the Five Civilized Tribes, which is a conglomeration of Native American Tribes, the industrialized and independent state of Tejas (Texas..of course), and the figurehead state of Albion.  Desmond and Lij are trying to make to Canada (shades of the Underground Railroad) in order to secure the boy’s freedom. However, the pair meets resistance from the aforementioned Five Civilized Tribes as they make their way across this interesting version of America. Politics and alliance by convenience lead to an outcome that was mildly surprising by the end of the story.

Broaddus created an engaging, fast-paced steampunk adventure that has room for more development. I wished the relationship between Desmond & Lij could have been explored more in the novella.  Lij loved stories and Broaddus did a good job of bringing out that aspect of the boy’s character. A longer story could have fleshed that out even more.  Also, I wanted to learn more about why Desmond was forced from his homeland of Jamaica. I just found out there is a sequel coming and I hope it will bring out those aspects in the upcoming book.

Buffalo Soldier is a solid novella, and a welcomed entry into the steampunk fiction subgenre.  Let’s see what Broaddus does next.