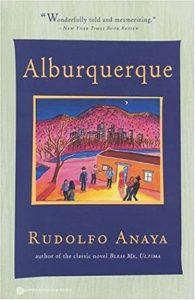 It is the story of Abran Gonzalez, a young boxer from Alburquerque who is brought to the hospital to see his biological mother, Cynthia Johnson, for the first time.  Johnson is a wealthy Anglo artist and reveals on her deathbed to Abran that she is his mother.  Abran learns his mother had a relationship with an unknown Mexican man that his grandfather wanted to be kept a secret.  Abran is determined to find out about his biological father and true identity.

Rudolfo Anaya was known for his modern classic, Bless Me Ultima, and rightly so.  I would add that Alburquerque is his other influential novel and deserves to be widely read.  We are in the midst of Hispanic Heritage Month and I would highly recommend Albuquerque as a must read.

Tuesday September 15th begins the celebration of Hispanic Heritage Month.  Hispanic Culture will be celebrated here in America until October 15th.  Obviously, a month is never a long enough time to honor any ethnic group’s contribution to American society. I will leave that to others who are more qualified than me to write and discuss… END_OF_DOCUMENT_TOKEN_TO_BE_REPLACED