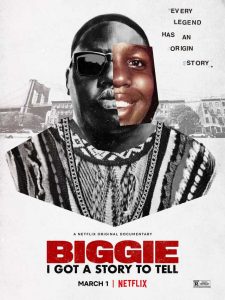 I just watched the latest Netflix documentary on rapper The Notorious B.I.G. aka Christopher Wallace.  I will admit that he was not my favorite rapper of all time.  Big Daddy Kane holds that spot with Rakim as a very close second.  However, I love watching the creative process for artists. The Notorious B.I.G. was an artist indeed.

The documentary shows unreleased footage of his travels on the road, his upbringing in Brooklyn, his roots in Jamaica, and his contacts in the music industry specifically Sean “Puffy” Combs, Mister Cee (DJ for Big Daddy Kane), Easy Mo Bee (Producer on his first album, Ready to Die), & Faith Evans (His wife). It spends a lot of time chronicling his life in the streets and how it shapes him into becoming The Notorious B.I.G.

Like most geniuses, Christopher has the gift early in his life.  Yes, I will conclude after watching this documentary that The Notorious B.I.G. was a musical genius.  He developed a friendship with jazz musician Donald Harrison (I have several of his songs downloaded from iTunes) that lived in the same neighborhood.  The Notorious B.I.G. listened to a wide range of music from country to reggae to rock to old school R&B to develop his cadence and flow as a rapper.  Sean “Puffy” Combs revealed he sang a lot of old school R&B songs than rap in private. I did not know that about The Notorious B.I.G. and I got a deeper appreciation for him as an artist.

If you are a fan of his music, then I highly recommend watching the documentary.  However, if you are not a fan of hip-hop but like watching how an artist creates their work, then I will recommend you watch it too.  The sad part is that The Notorious B.I.G. died before he turned 25 and had a lot more to offer the world with his art.  In closing, I want to mention that his mother, Violeta, comes out as a pillar of strength and resolve amdist the worst tragedy a parent could ever have.  Her comments compelled me throughout the documentary as much as Christopher’s journey to becoming The Notorious B.I.G.  Kudos to everyone involved and a must watch!