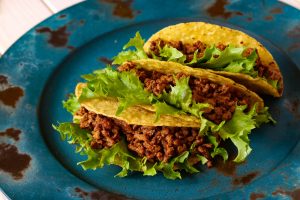 I know that was a bad take on Sir Mixalot’s ubiquitous megahit, Baby Got Back.  However, it is true. I love crunchy tacos and I can not deny it.  I can see the frowns on the faces of taco purists and connoisseurs everywhere. Bro, you have eaten too many Taco Bell tacos for your confession.  Actually, I have not eaten a lot of Taco Bell over the years.  However, the taco shells of Old El Paso or Ortega from my local HEB grocery store here in San Antonio is a different story.

I love a hard shell taco filled with ground sirloin (not ground chuck…lean beef is the best), shredded lettuce, blended mozzarella and colby jack cheese, and topped with pico de gallo.  To have it with a tall glass of Blue Moon or Stella Artois beer, I just created my slice of foodie nirvana. Even the taco purists can not resist having those kind of tacos for dinner.

Here are some fun facts about Tacos:

Well, there is my confession.  I’m sure if my taco confession is good for my eternal soul.  However, I do believe it’s good for my foodie soul.  Anyone else out there a fan of crunchy tacos?  I know I’m not the only one.  I think it’s time to have crunchy tacos for dinner.  Thanks for reading!  🙂

← Marion’s Favorites: Cherry Pie
Stuck on a Desert Island What 3 Authors Would You Read? →