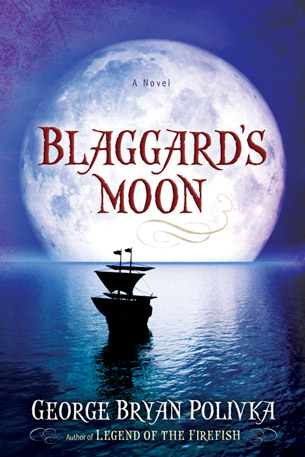 I recently wrote a review for the Trophy Chase Trilogy by George Bryan Polivka.  Please check it out on this blog site if you haven’t already!

Well, the author has written a prequel to that trilogy titled Blaggard’s Moon.  It is a standalone novel and you don’t have to have read the Trophy Chase Trilogy in order to understand what’s happening in this story.

The novel starts out with Smith Delaney, a sailor, awaiting his fate on the back of a pirate ship. He has been sentenced to death by the pirate ship’s captain for treason.

While awaiting his fate, he decides to recall a story told by Ham Drumbone about how the great pirate, Conch Imbry, was finally defeated.  Also, he relives his own role in that story.

The story shifts from Smith Delaney’s recollections to Ham Drumbone telling the other sailors about it.

Polivka does an excellent job (like he did in the trilogy) with good characterization and the  intertwining of Christian principles into an adventurous, swash-buckling (with a touch of romance) story.

One of the themes of the novel was asked by Smith Delaney.  Why does God allow evil to happen in the world?  And why does God seemed to let the bad guys get away with evil?

Blaggard’s Moon is a good, page-turning read and highly recommended.