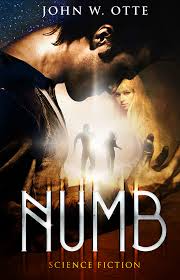 What if you are numb to pain and feelings for a good portion of your life?  And all of sudden you begin to feel again and are not numb anymore?

Those two questions were answered in Numb by John W. Otte. Numb is the story of Crusader, an assassin trained by the Ministrix to kill heretics and others who come against the church and Isolda Westin, a woman whom the Ministrix wants dead.

It was considered an easy job for Crusader to hunt down Isolda and fulfill his duty for the church.  However, when he saw her face-to-face for the first time everything changed.  I will not give away anymore than that. I liked how the author developed these two characters and stayed away from becoming too sentimental and stereotypical in a science-fiction thriller like this one.

The author did a soild job in showing the uneasy truce between the two societies that are a part of the world of the novel.  The aforementioned Ministrix and the atheist society of the Praesidium both were vying for power in order to get the people of this world under control.  Otte gave an honest portrayal of how religion and ideology can corrupt both societies whether you believed in a higher power or not.

It seemed that the author wanted to highlight the theme of grace in the novel. While reading Numb, I thought of these words by Paul:  “But by the grace of God I am what I am, and his grace toward me was not in vain.”  {1 Corinthians 15:10}  This first sentence of that verse of scripture from 1 Corinthians in the New Testament was something that both Crusader and Isolda would have to face in the story.

Numb is a Christian Science Fiction novel and it doesn’t shy away from that worldview in the story.  However, I would recommend it to science fiction fans who wants to read a solid, page-turning novel.