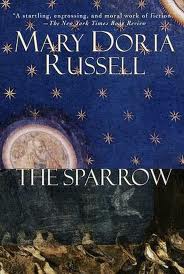 Have you ever read a book that you knew instantly you should have read years ago?

I knew it after reading the first chapter of The Sparrow by Mary Doria Russell.

I was working at a mom-and-pop bookstore in Santa Fe, NM in 1996 when this novel was published. I remembered the sales rep from Random House promoting The Sparrow at that bookstore and how he believed that readers would be talking about this book long after they read it.

Of course, it was the sales rep’s job to promote their publisher’s books and their objectivity could be questioned as the sales reps were more concerned about the bottom line then the quality of the novel they were selling to these small independent bookstores. Nevertheless, I’ve came to this novel a decade and half later (better late than never) and realized that sales rep was right in his prediction.

The Sparrow tells the story of Emilio Sandoz, a Jesuit priest, who leads a first contact mission to the Planet Rakhat. However, he returns to Earth as the only survivor and is blamed for the mission’s failure. The priest reveals his side of what happened on the mission to his father superiors of the Catholic Church in Rome and undergoes a crisis of faith that becomes more apparent by the end of the novel.

The characters are what makes The Sparrow a great novel. Russell creates real, three-dimensional characters that will remain with you long after the story is finished.  Actually, my favorite characters of the novel were Anne and George Edwards. They were liberal, agnostic, and Emilio’s best friends. Their relationship develops throughout the story and shows how the author did an excellent job of not sugarcoating their differences with the Edwardses’ non-belief in God and Sandoz’s belief in God.

There is a scene in the novel where Anne, a doctor, wants to blame God for letting one of their comrades (another priest) on the mission die while she did everything she could to save his life. That scene was raw and unforgettable as anything I’ve read in contemporary fiction.

The only issue where I could be critical of the novel is in the density in explaining the trip to Rahkat. I could see for non science-fiction readers it might be a bit boring and seem like a “info-dump” in which that genre is known for.  However, Russell does an excellent job of not letting that density slow the pace of the novel.  It is woven into the plot very well and doesn’t take away from the rest of the novel’s strengths.

This is a thoughtful, moral work of fiction and proclaims itself being just as effective as a book of theology or a run-of-the-mill sermon at your local church in showing how faith can be shaken under difficult circumstances.

I will give The Sparrow my highest recommendation to be read by all serious readers. Also, I will add it to my favorite novels list.

8 Responses to Book Review 34: The Sparrow by Mary Doria Russell