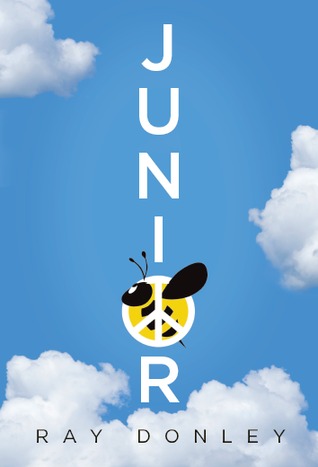 “Junior, I did not know if the tape would be helpful, but you can never have enough good information. I did not trust Fairman, in part because I never trust men who marry rich women, particularly if they use their spouse’s money to fund their political amibitions. That’s just unseemly.

Now I had absolutely no idea that Fairman would defile those poor women, but his actions illustrate a truism you should never forget: men–be they Christian, Muslim, Jew, white, black, brown, or purple–are stupid when it comes to sex. At least once in his life, and generally dozens of times, a man will do something stupid because the blood leaves his brain and heads south. Never forget that, Junior. Every man you deal with his this defect, and there will come a time when you can use this defect to your advantage–like we are about to do with Fairman.

That nugget of wisdom is from Joshua Jennings Jr’s journal in the hilarious, zany first novel, Junior by Ray Donley. Junior is a fugitive accused of bombing a Native American Reservation in New Mexico where the President and Vice President of the U.S. were killed along with his father.

However, Junior is shocked to hear his father’s voice on the tape recording saying that bombing was planned by him and Junior would be the main suspect of the murders.

Did a father plan his own death and frame his son for the crime? In usual circumstances, a plot like this would be great for a mystery novel. But, Junior’s story is completely different than the standard whodunit story and his three years on-the-run journal is being hailed and praised “as a classic study of the human condition.”

Well that hyperbolic statement is one of many in the novel that made me laugh out loud while reading it. Moreover, after reading serious books like Tracks by Louise Erdrich and The Book Thief by Markus Zusak, a over-the-top hilarious story is a much-needed and refreshing change of pace.

Junior pontificates in his journal on various topics: religion, politics, ethnic behavior and culture, sports, companionship, and his father whom he still loves despite his predictament. For example:

“Some interesting election news today. Dr. Davis and Big Fly Washington, the Democratic candidates, held a rally today at the University of Wisconsin in Madison, Wisconsin. Dr. Davis told the crowd: ‘I am going to say something very unusual, so you should probably pay attention.’ When the crowd stopped cheering, he continued:

A couple of weeks ago our Republican opponents took a bold stand by promising they would never commit this great country to a stupid war. Big Fly and I have talked about Ebenezer Cohen’s “no more stupid wars” speech and the truth of the matter is that we could not agree more. We join with Ebenezer Cohen and General Dozier in their stand that America should not fight any more stupid wars. I know it is rare for candidates to agree on anything, but we think Ebezener and General Dozier are exactly right on this issue and we thank them for elucidating it so clearly.

Civility in a presidential campaign? Agreement on an issue by the candidates? The end of the world as we know it must be right around the corner. Tell the Baptists that the Antichrist is lurking in the shadows.”

Imagine if our current political climate could adopt this approach?  Hmmm…..

For serious readers, Junior has too many coincidences and over-the-top stories that would stretch the credulity of the story in their eyes.  I must admit I thought some of the journal entries were a little long-winded and bogged the story down a bit. Nevertheless, I had not read a novel this fun and imaginative since Tom Robbins’ counter-cultural best-selling novel, Jitterbug Perfume.

Junior was a breath of fresh air to read and the story had a fascinating premise with interesting characters and revealed the importance of a father/son relationship.

(Lastly, I would like to thank the author for providing me a copy of this novel to read and review for the blog.)