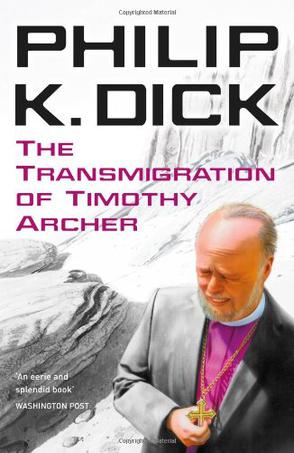 Well, I finally decided to read one of Philip K. Dick’s novels. Since he’s one of the giants of the science-fiction genre and I’m a reader of it, I thought the time was right to check him out.

Some of you would have told me to read either Man in the High Castle or Flow My Tears, the Policeman Said, considering these are his most popular and well-received novels.

But, The Transmigration of Timothy Archer, intrigued me the most and I believed it would be an excellent first Dickian novel to read.

So what is this novel about?

The Transmigration of Timothy Archer tells the story of an Episcopal Bishop, Timothy Archer, who is determined to find the true identity of Jesus Christ.

Timothy Archer learns about the existence of some ancient scrolls from the Zadokites, a Jewish sect who were around before the time of Jesus.  The bishop believes those scrolls would reveal Jesus’ true identity. He decides to go to London to determine if they are the real thing.

However, the novel’s narrator, Angel Archer, who is the Bishop’s daugther-in-law shows him to be a smart, charming, but deeply-flawed dilettante.

Through Angel, we can see Timothy began to lose his way because of a relationship with a mistress, the death of his son, and the questioning of his faith and position as a bishop.

Moreover, Angel came off as cold and cynical and I didn’t care for her throughout most of the story. But, Dick’s strengths as a writer came through in this novel by having  compelling characters and essentially creating a philosophical and spiritual page turner.

Overall, I’m glad I read the Transmigration of Timothy Archer. While, I don’t think this novel will be everyone’s cup of tea. But, it was one of the more interesting and insightful character-oriented stories I have ever read.

2 Responses to Book Review 17: The Transmigration of Timothy Archer by Philip K. Dick