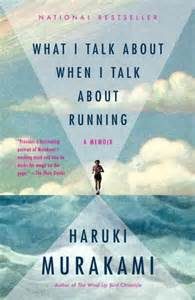 Sometimes, there is a book that sits on your bookshelf for awhile that you have not read for one reason or another. When you walk over to your bookshelf to grab something to read, that book just sits waiting for its turn to be placed in your hands and the pages opened.

Finally, you will have reached a time when that neglected book whispers, “It’s time to read me.”  And you will finally listen to it.  Well, What I Talk About When I Talk About Running from Haruki Murakami is that book for me.

Sometimes as a reader (and reviewer), you will never know why a book affects you the way that it does.  You open the pages and the writer just brings into their world and you are totally absorbed until the last page has been read.  Haruki Murakami’s memoir on running and writing just did that for me.  As you can tell, this review will be totally positive and I will highly recommend it to those readers who are interested in reading about running and writing from one of the world’s highly regarded writers.

Here’s a section where he talks about what it takes to become a novelist (but could be applied to any discipline you want to pursue):

In every interview I’m asked what’s the most important quality a novelist has to have.  It’s pretty obvious: talent. No matter how much enthusiasm and effort you put into your writing, if you totally lack literary talent you can forget being a novelist. This is more of a prerequisite than a necessary quality. If you don’t have any fuel, even the best car won’t run.

If I’m asked what the next most important quality is for a novelist, that’s easy too: focus—the ability to concentrate all your limited talents on whatever’s critical at the moment. Without that you can’t accomplish anything of value, while, if you can focus effectively, you’ll be able to compensate for an erratic talent or even a shortage of it.

After focus, the next most important thing for a novelist is, hands down, endurance. If you concentrate on writing three or four hours a day and feel tired after a week of this, you’re not going to be able to write a long work. What’s needed for a writer of fiction—-at least one who hopes to write a novel—–is the energy to focus every day for half a year, or a year, two years.

Fortunately, these two disciplines—focus and endurance—are different from talent, since they can be acquired and sharpened through training. You’ll naturally learn both concentration and endurance when you sit down every day at your desk and train yourself to focus on one point.

That section near the middle of the book made the entire reading experience for me. However, Murakami chronicles his running experiences from late summer 2005 to early fall 2006 in this memoir.  What he learns from running how that has helped him as a novelist and the mindset he had to develop along the way.

What I Talk About When I Talk About Running has earned a permanent space on my bookshelf.  Moreover, it’s a lesson learned about reading something much sooner than letting a gem like this one languish on the shelf for no good reason.