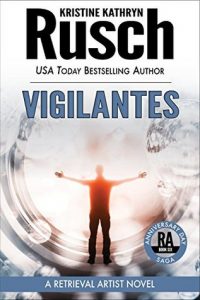 Reading a series you enjoy is like wearing your favorite part of shoes.  They are a comfortable fit and make you smile every time you put them on.  Well, the Retrieval Artist Series by Kristine Kathryn Rusch has given me that same kind of feeling and after 13 books (with 2 more to go), I’m an unabashed fan of these books.

Vigilantes is Book Six of the Anniversary Day Saga that started with Anniversary Day and with two more books to go in the saga, the plot thickens as Retrieval Artist Miles Flint and Moon Chief Security Noelle DeRicci attempt uncover the mystery behind the Anniversary Day bombings on the Moon colony of Armstrong.  Detective Bartholomew Nyquist (an excellent minor character throughout the series) and Miles uncover new information that leads them one step closer to what happened on that fateful day of the bombings.  However, the murder of an prominent lawyer in Armstrong reveals another layer that Noelle DeRicci did not expect. She decides to launch a secret investigation in attempt to finally reveal who is responsible behind the bombings and keep another attack from happening.

Vigilantes is another solid entry in the Retrieval Artist Series and my favorite book of the saga since Blowback.  It’s a must read for fans of the series and I would recommend for newcomers to start with Anniversary Day and read the subsequent books before getting to this one.  I’m looking forward to Starbase Human, the next to last in the Anniversary Day Sage, and one step closer to resolving those Anniversary Day Bombings.