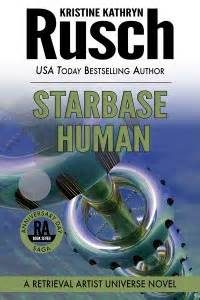 Can an old and dilapidated starbase be the key to solving the Moon’s Anniversary Day Bombings and it’s survival?

This novel centered around several minor characters that have played key roles throughout the saga. Earth Alliance Frontier Marshall Judita Gomez, who had first appeared in Murder of Clones (Book 3 of the Saga), was nearing retirement from a distinguished career but decided to launch her own investigation into the bombings leading to a startling discovery. Criminal Kingpin Luc Deshin, who had first appeared in Blowback (Book 2 of the Saga), came forth with information that created another layer into what happened with the bombings and brought his participation along a criminal network into the arena. Several other minor characters played important roles in this novel as readers get one more step closer to finding out what happened in Armstrong.

Rusch has created a fascinating intergalactic world where richly drawn human and alien characters are the strength of the Retrieval Artist Series. She has made this reader create about minor characters like Marshall Gomez and Luc Deshin as much as I have with the main characters, Retrieval Artist Miles Flint and Moon Security Chief Officer Noelle DeRicci. The author has revealed throughout these books that characters matter first and foremost and are the essential ingredient to any great story regardless of genre.

Starbase Human is another winner from Kristine Kathryn Rusch and sets up the thrilling conclusion to the Anniversary Day Saga in Masterminds, Book 8 and the final novel of the saga. Again, I would suggest that new readers start with Anniversary Day (Book 1 of the saga) and read the following books before Starbase Human. Highly recommended.